The Earth by Emile Zola 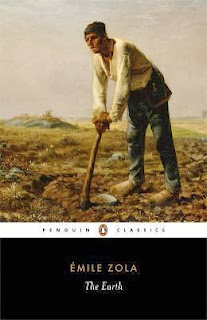 I was so happy to get The Earth by Zola as my random selection (I was convinced it was going to be The Old Curiosity Shop by Charles Dickens).  I couldn't wait until the end of December to read this, so I've been sitting on this review since before Christmas.  And once again, Zola blows me away.

The Earth is #15 of the twenty novels of the Rougon Macquart series; but like most of the series, it's essentially a stand-alone novel. Set in the 1860s in rural France, not far from Paris, this is the story of two families living in a farming village, Rognes, and the plot seems loosely based on the Shakesperean tragedy King Lear.  The Rougon-Macquart connection is introduced to the readers with a day laborer, Jean Macquart, who has come to the village after serving in the Army.  Jean befriends a young girl, Francoise, who lives with her older sister Lise.  Lise is pregnant by her boyfriend, Buteau, but he refuses to make an honest woman of her.

Buteau's family quickly becomes the focus of the novel.  Buteau is the youngest child of three, and the primary action centers around Buteau's parents.  His father, Fouan, owns a good bit of land, and has decided to split it between his three children now, instead of after his death, to avoid inheritance taxes.  In return, Fouan and his wife will continue to live in their house and receive an annuity until they die.  Sounds generous, right?  Wrong!  The three siblings -- Buteau;  his drunkard brother, Hyacinthe (nicknamed "Jesus Christ") and his sister Fanny (and her husband Delhomme) can't come to an agreement about who gets which plots and how much their parents deserve to be paid for the rest of their lives (which would include firewood, wine, and various other allowances).  It's all very petty and they're haggling and bickering about it. Finally it all seems settled.

Meanwhile, Jean becomes closer to Lise and Francoise, but things take an interesting twist.  He's in love with Francoise, but feels obligated to marry Lise because she's older and has an illegitimate child.   Basically, everyone is greedy, jealous and bitter about the land they didn't get, they're all trying to wheedle more money out old Fouan, and there are several love triangles, some of them sort of icky.  The other people in the neighboring farms are just as unpleasant.  Since this is a Zola novel, things quickly spiral out of control and go from bad to worse, but it's still fascinating stuff.  Even though most of the characters are awful, I couldn't stop reading it since I absolutely had to find out how the story would turn out.  And two of the characters, Lise and Buteau, are some of the worst creations in the entire Zola canon.  Seriously, I cannot recall a nastier pair.

For the record, this book is really not for the faint of heart, or those easily offended.  This being a rural community, there's a lot of barnyard humor, much if it centering around reproduction (both animals and humans) and bodily functions.  Plus, Zola doesn't mince words, at least not in this modern translation -- I read the Penguin classic translated by Douglas Parmee.  This must have been shocking stuff back in the 1800s -- there's quite a lot of sex and violence for a classic novel.

Zola considered The Earth to be his greatest work.  I don't think it's nearly as famous or popular today as Germinal -- not that I'd call any of his works terribly popular, at least not in the U.S.! When I checked Goodreads, there were only 586 ratings for The Earth, compared to more than 10,000 for Germinal and more than 8,600 for the next most popular, Nana, which I still haven't read.  I'm hoping Zola will get the attention he deserves -- The BBC television series "The Paradise" is based on The Ladies' Paradise, which I read last summer, and I noticed there were quite a few people on the waiting list for it at the library.  And there's another Rougon Macquart novel in a new translation!  Money (L'Argent), the 18th book in the series, is schedule for publication by Oxford World's Classics in March, so I'm looking forward to that.

Did anyone else read Zola for the Classics Spin?  Did you like your Spin selections? And most importantly, when is the Classics Club going to do it again?
Posted by Karen K. at 10:37 AM