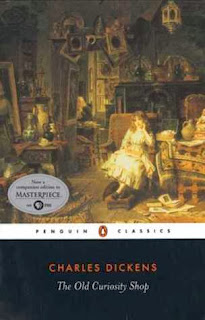 I'm nearly finished reading the entire Dickens canon.  For some reason, I'd kept putting off The Old Curiosity Shop, his fourth novel.  Something about the story just didn't interest me (though I did manage to get through Barnaby Rudge, Martin Chuzzlewit, and Dombey and Son).  The story of angelic Little Nell just didn't appeal.

However, a couple of months ago, I signed up for the fourth round of the Classics Spin, and somehow I was convinced I'd end up with Dickens.  I actually was assigned Zola (woo hoo!) but since my library had just purchased an audiobook of The Old Curiosity Shop I decided to give it a try, and I'm so glad I did; it's a classic early Dickens, with some of his best characters.  I do agree that my initial assessment of Nell was pretty spot-on, but it's worth putting up her just because the rest of it is really good.

So, basically, it's the story of Little Nell, a pure and beautiful golden-haired child, who's about twelve or thirteen, and her grandfather, who owns The Old Curiosity Shop.  Grandfather (whose name is never actually revealed) is not so good with money and is massively indebted to the horrible, evil Daniel Quilp, one of Dickens' most vile creations.  Nell also has an older brother, Frank Trent, who is convinced the old man has pots of money stashed away.  Frank decides to get his hands on the money by persuading his friend Dick Swiveled to marry Nell in a few years, so they can both profit.  However, Grandfather has a deep dark secret, and after Quilp comes to collect, he and Nell escape in the middle of the night.  The pair make their way around the countryside just a few steps ahead of the nasty Quilp, who wants his revenge on Grandfather and to get his nasty hands on Nell as well.

Meanwhile, back in London, Nell's best friend and worshipper, the good-hearted Christopher Nubbins, also known as Kit, is now unemployed.  He was Grandfather's helper and errand boy, but Gramps and Nell have done a runner and Quilp's taken possession of the shop.  He finds work with the good-hearted Mr. and Mrs. Garland, and later, he and Mr. Garland get involved in the search for Nell by a mysterious stranger.

Despite my intense dislike of the sickly-sweet Nell, I really did like this book.  Nearly all the other characters are far more interesting and well-developed -- Quilp is deliciously evil, his wife is a sniveling, abused whiner.  There's Quilp's lawyer and minion, the obsequious Sampson Brass, and his sister, the tough-as-nails Sally.  My favorite character was Dick Swiveller, a ne'er-do-well buddy of Nell's horrible gold-digging brother, Frank Trent.  Originally Dick comes on the scene as Frank's sidekick, but he becomes a key figure in the story after Quilp gets him a job as law clerk to Sampson and Sally, the better to manipulate everyone.  Dick's relationship with Sally's downtrodden servant was my favorite part of the book.

But that Nell!!!  Ugh!   Once again, Dickens has created a perfect, angelic wet blanket of an ingenue.  She is so dull as to be completely devoid of personality, other than her Good Qualities.  The story seems to come to a screeching halt when she's in the picture.   She is just so boring, I was constantly tempted to fast-forward through the audiobook and skip her portions.  I couldn't wait to find out what was happening to everyone else.

I listened mostly to the Naxos audiobook version, which is brilliantly narrated by Anton Lesser.  This is by far one of the BEST audiobook narrations I've ever heard -- Lesser created such wonderful, distinct voices for all the characters.  He made the funny parts funnier and the creepy parts scarier.  I was tempted to read the book when I wasn't in the car, but I didn't want to miss any of his performance, so I ended up taking longer to finish the book than I anticipated.  It was absolutely worth it though, and I would listen to just about anything he read.

So -- now I only have two more of Dickens' works until I've finished the whole list -- The Pickwick Papers and The Mystery of Edwin Drood -- his first and last works.  Which one should I read first?  And should I bother with the nonfiction as well?  I still have Sketches by Boz and Pictures of Italy on my shelves.
Posted by Karen K. at 11:42 PM