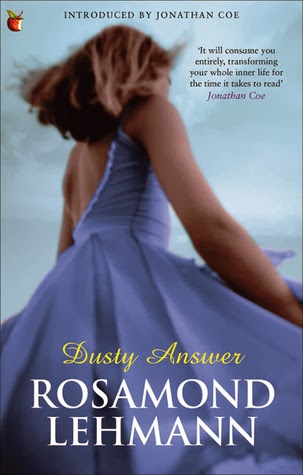 This is my third book this year completed for the TBR Pile Challenge, and one of the many books from Virago press that I still have on my to-read shelves.  The Virago books kept popping up on my radar after I started reading Persephones; apparently, a lot of Persephone fans enjoy Viragos as well.

And it's yet another book published between the wars.  Set in England the early 1920s, Dusty Answer is the story of Judith Earle and her love affair with an entire family, the Fyfes.  Before the Great War,  Judith lives in the country, somewhere outside of London.  The house next door belongs to an elderly woman with five grandchildren, four boys and a girl who spend a lot of time there.  The children live with the grandmother because some of the parents are dead or traveling or are unreliable.  Two of the boys are brothers.  Judith is several years younger than the Fyfe children but plays with them because they're the only children in the neighborhood.

One of the brothers, Charlie, is everyone's favorite, including the grandmother.  Before he's shipped off to war, he marries his cousin, Mariella.  He's killed in the war and Mariella has a baby not long afterward.  The family has mostly left at this point, and occasionally return to the country house during holidays.

Throughout the book, Judith she fantasizes about falling in love with each of the Fyfe men in turn -- Julian, the eldest, who had a falling out with his brother Charlie just before his death; the dull but reliable Martin, and the enigmatic Roddy.   Eventually, she goes off to Cambridge and has a complicated relationship with her best friend, the beautiful Jennifer, who is beloved by nearly everyone in their dormitory.

I liked this book but I'm having a hard time describing what it's really about.  I suppose it's a sort of coming-of-age story -- it starts out with Judith being alternately in love with all the Fyfe boys; then the story shifts and it's mostly about her life as a female university student in the 1920s.  Along the way, she learns about unrequited love and heartache.  It was a very melancholy read, but not exactly sad.

I think the best thing about the book was the characterization.  There's not a tremendous amount of plot, but the writing was really good, though it's sometimes written in the stream-of-consciousness style, which is not usually my favorite.  Also, the characters were very well developed.  I also found it rather modern regarding its depiction of some characters that were obviously homosexual.  There aren't any explicit sex scenes, but since it was published in 1927 I suspect the subject was rather shocking for its time.

Overall, this was a good read, not too heavy, and luckily not too long since I'm simultaneously still reading Few Eggs and No Oranges, a WWII diary that's almost 600 pages long, and I've just started bits and pieces of my next Classics Spin pick, He Knew He Was Right by Anthony Trollope, which is a whopping 836 pages!
Posted by Karen K. at 9:56 PM