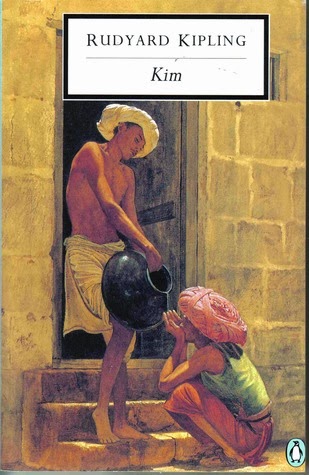 I put Rudyard Kipling's Kim on my TBR Pile Challenge list this year because it was on the Modern Library's Top 100 list, and because I bought a copy for a mere $1 at a library sale several years ago -- I've moved it with me to two different houses since then!  I chose Kim off my TBR pile because it was fairly short and because it's May, which is Asian-Pacific American Heritage Month (I'm on the Diversity committee at the library, and we've been planning events for it all year.  Since Kim is set in India, I thought it would fit in nicely).

Basically, this is the story of Kimball O'Hara, also known as Kim, a young orphan boy growing up mostly on the streets of Lahore, India during the Victorian era.  He's not an Indian though, being the child of an Irish soldier and a nameless mother.  When book opens, Kim is about 13 and he meets a Tibetan lama (a holy man) and becomes his apprentice -- his chela. The lama has a quest to find a particular river, and Kim also has a quest.  He's always been told that it was his destiny to meet a red bull on a green field.  Kim joins the lama, but on their quest, he encounters a group of British soldiers.  They find evidence that Kim's father was once in their regiment -- and they have an emblem on their regimental flag that's a red bull on a green field.

Naturally, they have to make sure he's raised as a white child.  Plans are made to give him a proper education, but a clever colonel realizes that if trained, Kim's knowledge of Indian languages and culture could be a great asset to the British forces.  He's shipped off to school but spends his holidays being trained by secret agents.  Kim becomes drawn into the "Great Game" of British imperialism.  Eventually, he rejoins the lama while still working as a secret agent for the British.

I always thought this was some kind of adventure book, but it's the slowest adventure I've ever read -- my edition was 286 pages but it took me nearly three weeks to finish it! I did enjoy the details about Indian culture, and the sense of place, but the pace of the story was just glacial.  If you're looking for a great swashbuckling adventure tale, this isn't one I'd pick.  It's really more about Kim's quest, but I'd say it's really about his quest for identity as an Anglo child growing up in India.  Over and over, he's reminded that he's a Sahib, and therefore superior. 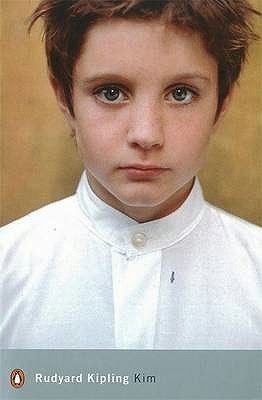 I was surprised at how much religion was in the book.  There's a lot of Buddhism, and an awful lot of references to Indian gods and legends, most of which I didn't get (I was actually reading two different editions, one at home and library copy on my breaks at work -- that copy didn't have any footnotes).  Apparently this was quite groundbreaking for its time.

Kim sometimes considered a children's book, which I don't get at all.  I can't imagine any child today picking this up and reading it for fun -- it's a fairly interesting story, even though Kim is yet another child that speaks and thinks like an adult.  I'm pretty sure the language of the story would turn off most modern children. (I did check my library catalog, and half the copies in the system are cataloged as Children's Fiction.  I should go back and see how often they've circulated!)

So, my final verdict: if you're looking for a fast-paced, rollicking adventure -- I would read Kidnapped or Treasure Island.   If you're interested in Indian culture and an insightful look at British Colonialism in the late 19th century, this is a fine read, as long as you're not in a hurry.
Posted by Karen K. at 8:44 PM