He Knew He Was Right: the BBC TV adaptation

I've finished watching the excellent 2004 adaptation of Anthony Trollope's classic novel, He Knew He Was Right, which I selected for my TV/Movie adaptation of a Classic for the Back to the Classics Challenge.  I was a little skeptical as to how they could adapt an 800-page book into a four-episode miniseries, but they did a pretty good job.  Andrew Davies, who famously adapted Pride and Prejudice, Bleak House, and many other excellent classic books, wrote the screenplay, so that was encouraging.

Overall, the casting was excellent -- I recognized lots of actors from other BBC productions.  One of my favorite actors, Bill Nighy, played the slippery rake Col. Osborne.  Here he is, probably causing some kind of mischief with the reputation of Emily Trevalyan, daughter of his oldest friend: 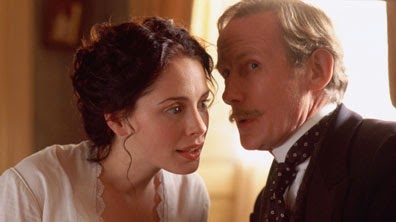 Another great bit of casting was Geoffrey Palmer (well known as Lionel in As Time Goes By) as Emily's father and Geraldine James as her mother, Lady Rowley.  I actually liked the Lord and Lady Rowley characters better in the series than in the book.  Geoffrey Palmer is less buffoonish than Lord Rowley in the book, and Lady Rowley is obsessed with marrying Emily's sister Nora off to a rich aristocrat, Mr. Glascock.  However, the mini-series was heavily condensed, and cut out most of the side plot of Glascock's romantic subplot once Nora rejects him. 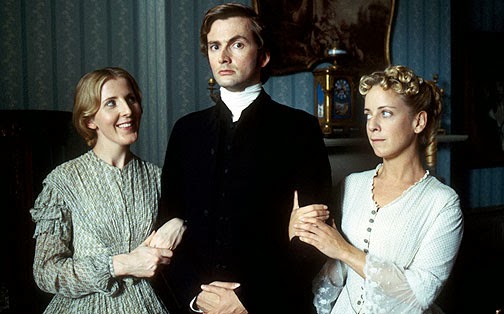 My favorite storyline was Rev. Gibson and the two sisters who are fighting over him (above).  David Tennant was hilarious as Gibson, and Fenella Woolgar (left) and Claudie Blakely (right) were wonderful as the cutthroat sisters. 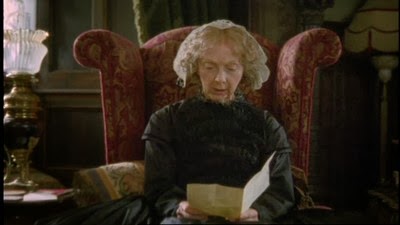 The best casting of all, however, was the late Anna Massey as Aunt Stanbury, above.  She's just wonderful.  And Matthew Goode was just adorable as Brooke Burgess, her intended heir.

My biggest objection was the casting of Stephen Campbell Moore as Hugh Stanbury, the best friend of Louis Trevalyan, and the love interest of Emily's sister Nora.  He's a good actor but he's nothing like Hugh as described in the book.  I'm racking my brains trying to find a better choice, but all the British actors I can think of who are about the right age are just too handsome -- Hugh is supposed to be sort of burly, not very attractive.  But I'm quibbling.


Overall, a good production, though of course abridged.  A lot of sub-plots were condensed, especially scenes taking place in Italy.  As usual, the book was better, but they did a pretty good job.  I haven't read any Trollope lately so I think I may choose one of his books off my shelf for a nice long summer read.  Maybe Can You Forgive Her?  I haven't read any of the Pallisers series yet and my library has this on audiobook -- it's 22 discs!

So that's my sixth posting for this challenge  -- I'm halfway finished!  Bloggers, how are you coming along on your book challenges?  And which other TV adaptations from classic novels are your favorites?
Posted by Karen K. at 7:42 AM