Singled Out by Virginia Nicholson 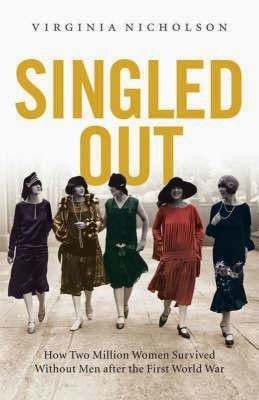 About one million British men were killed during WWI -- and another 2 million wounded, almost 35% of their total forces.  A disproportionately large percentage of these men were officers.  This "lost generation" was devastating, not only because of the lives lost and ruined.  After the war, approximately 2 million women were left single, with no prospects for husbands or children.  Singled Out by Virginia Nicholson is the story of how those women coped during an era when the ultimate goal of most women was to get married and have a family.

This book is fairly short, but packed with information.  It must have been absolutely terrible -- for some women, especially in the upper classes, the ratio of available women to men was something like ten to one.  A higher proportion of upper-class men enlisted and were killed in the war, and most upper-class women couldn't or wouldn't marry down the social scale.  Many of them had few prospects, other than becoming teachers and governesses, and maiden aunts, during a time when being a spinster was the ultimate shame.

Nicholson's book describes a variety of women, some who became famous, like writer Vita Sackville-West and archaeologist Gertrude Caton-Thompson.  Some of the women in the book were able to use this terrible situation to break down barriers and pursue other careers and dreams, such as becoming doctors, lawyers, and businesswomen.  Though it's probably a fraction of many of the women who were left single and childless, it's a very interesting look at how the era and their situation contributed to the changing role of women in the early part of the century.

This book was very interesting and well-written, and I especially like how the author organized the works mentioned at the end of the book -- she quoted from so many novels and biographies, it was nice to have them organized so I can go back and find them again easily (and add them to my to-read list!)

I highly recommend this book, especially if you're interested in social history and about the aftermath of WWI.  It's particularly timely because of the upcoming anniversary of the Great War.  And another book I can check off my 2015 TBR Pile list!
Posted by Karen K. at 10:30 PM