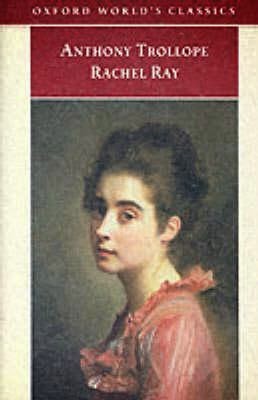 Among the twenty books by Anthony Trollope that I own is Rachel Ray.  It's not one of his most famous books compared to the Barchester series, the Pallisers books, or even The Way We Live Now, which is a shame, because it is mostly delightful, with one quibble.  It is also blessedly short, just about 400 pages, compared to some of his 800 page chunksters.

Rachel Ray is 18 and lives in Baselhurst with her widowed mother and her sister Dorothy, who is ten years older and also widowed.  Both widows were previously married to clergymen, and Dorothy is very devout and evangelical.  Trouble starts one night when she reports to her mother that she has seen her younger sister doing something scandalous . . . walking alone with a man!!!  Shocking!

This young man is in fact Luke Rowan, who is a guest of the Tappitt family.  Rowan is the heir to a portion of the local brewery, and came to Baselhurst to try and work out an arrangement with Mr. Tappitt.  Mrs. Tappitt had great hopes that he would marry one of the three unwed Tappitt daughters, who are friends of Rachel.  Rachel was visiting her friend Cherry Tappitt, and was walking home when he overtook her and caused this minor scandal.

Meanwhile, Mr. Rowan has all kinds of ideas about improving the brewery and the beer.  Mr. Tappitt thinks he is a young upstart, and Mrs. Tappitt is smarting because Luke had the nerve to fall in love with Rachel instead of one of her daughters.  Luke is a little hotheaded, and he Mr. Tappitt can't get along.  Meanwhile, there's a local election which causes the town to start taking sides, partly based on the whole Rowan/Tappitt feud, and poor Rachel is caught in the middle.  The story follows the courtship of Rachel and Luke, and is a social satire about gossip, hypocritical evangelicals, and local politics.

I mostly enjoyed this book.  The characters are charming and interesting, and Trollope gets in some good digs, especially about the overly pious Dorothy and a suitor who is mostly interested in her money.  The only part of the novel I didn't enjoy was an aspect of the local election -- the current MP is challenged by a local businessman who is -- gasp -- a Jew.  He's not a bad character, but some unpleasant comments are made about him by other characters (mostly his political opponents) which made me uncomfortable.  I'm not sure if Trollope himself was anti-Semitic, or was just trying to make a point about people of this time period, but I really wish it hadn't been included.  But it's otherwise a nice portrait about life in a small town during Victorian period, and a very easy read.

I'm counting this as my 19th Century Classic for the Back to the Classics Challenge.
Posted by Karen K. at 11:26 PM