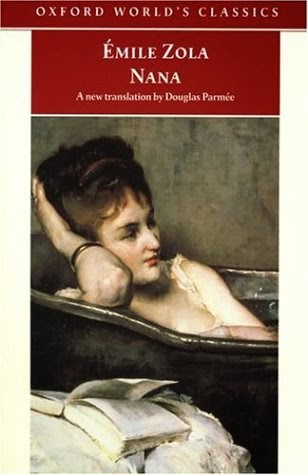 Well, I didn't think it could happen, but it did.  Zola has disappointed me, in a very big way.  Nana is the twelfth book by Zola that I've completed, and the tenth in his epic Rougon-Macquart cycle, and this is the one I've liked the least, by far.  It's also the one that took me the longest.  Usually I zip through a Zola novel in a week, sometimes just a couple of days, but this one just dragged for me -- it was more than a month from start to finish, because I just couldn't get into it.

Nana is one of Zola's most famous novels, but for those who are not familiar, it's the eponymous story of a courtesan and sometime actress named Nana who becomes the most talked-about, scandalous woman in Paris.  She's kind of like a cross between Helen of Troy, Madonna and Kim Kardashian.  Men are obsessed by her, and she drives many of her lovers to financial ruin, or even worse.  Nana is an addiction, a succubus -- men are trapped by her spell, and will stop at nothing to satisfy her every whim.

Overall, I found this to be a really sordid, depressing tale.  I've read a dozen novels by Zola so far, and believe me, he is the master of writing about awful people in unpleasant situations.  However, I think this is the first book where I didn't care about a single one of the characters at all.  Usually there's someone whose story both repels and fascinates me enough to keep reading, but this book took me more than a month to finish, I was so disinterested.  Usually I'll finish a Zola book in a few days, normally not more than a week.  Nana just dragged on and on.  I hated everyone, and I thought they all deserved what was coming to them.  (I would have given up, but I kept hoping it would get better, so I finally plowed through it.)

I was also really disappointed by the writing.  Most of the time Zola writes really tight plotlines; this one seemed all over the place, lacking in focus. It started out in a theater, where a new production of a play is about to premiere.  Nana is described as not being able to act or sing, but somehow, her presence is so electrifying, people can't stop watching her.  Then the story shifts to Nana's sideline as a prostitute -- she's still turning tricks on the side, since she can't support herself as an actress.  There are subsequent chapters about Nana's love affair with a count, and how she essentially ruins his life.  The only chapter I actually liked is one where Nana and her entourage attend the races at Longchamps, which was very interesting and well-written (I've had a soft spot for horse racing ever since I read all the Dick Francis mysteries years ago.)  Finally, the last chapter was just wretched.

Another thing that really bothered me was an unpleasant sub-plot about Nana and her love affair with an abusive boyfriend.  It was really painful to read, and it just didn't seem to fit the character.  Even though she's vile, Nana is mostly a strong personality, strong enough to dominate men and bend them to her will, yet this horrible actor slaps her around and she seems to enjoy it.  I'm no expert on women in abusive relationships, but it just didn't make sense to me.  Plus, there are constant references to Nana's genitalia, and how she's using her sexuality to control men -- I just got tired of reading about it.  Zola has written some books that were very shocking for their time, but this one must have been the epitome of the racy French novel.  I got the feeling that Zola was writing some of it just for shock value.

I should really go and research more about the background of this book to get more of the metaphors.  (I usually go back and read the introduction until after I've finished a book, since I hate spoilers.)  I've heard this book is really a scathing satire about the decline of Paris during the time period, but I just don't care enough to find out.  If this were my first experience reading Zola, I don't think I'd ever read another one of his books again, ever.  I still own copies of three other Zola novels -- The Dream, The Debacle, and Money, and I'm really hoping that they're better than this one.

I am counting this as my Classic in Translation for the Back to the Classics Challenge.
Posted by Karen K. at 10:24 PM