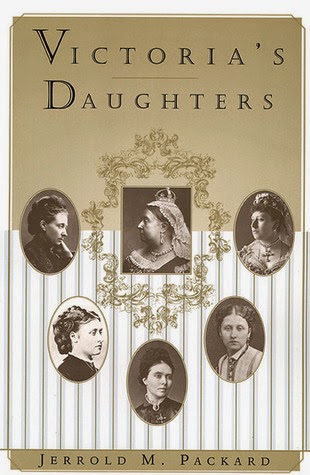 My fascination with Victorian writers has expanded to overlap with my love of non-fiction -- I find it so interesting to read the actual history that was going on during my favorite literary period.  I found Victoria's Daughters at one of the library sales a couple of years ago for a mere $1.  After the debacle of my last so-called nonfiction read, I needed some actual history to cleanse my reading palate.  Though it isn't nearly as scholarly as I expected, it was still a fascinating read.

Queen Victoria had nine children over a period of seventeen years, and five of them were girls: Victoria, the Princess Royal (known as Vicky), Alice, Helena (known as Lenchen), Louise, and Beatrice (she eventually had forty grandchildren).  Though not nearly as well documented as their famous mother, this is still a very interesting insight into the lives of the Queen's household, how European royalty was intertwined through marriage, and the transition from the 19th century to the 20th.

There are also some hints about the background of World War I, since Victoria's oldest daughter (also named Victoria and known as Vicky) married the oldest son of the German Emperor, and was the mother of William the Second of Germany, also known as Kaiser Wilhelm.  When Germany and England were at war, royal cousins were fighting on both sides.

Basically, it was the duty of Queen Victoria's daughters to make brilliant marriages:  her second daughter Alice also married a German prince, Louis of Hesse (her daughter Alix married Nicholas of Russia, the final Tsar); her fourth daughter Louise married a future Scottish Duke; the other two daughters, Helen and Beatrice, also married minor German princes.  Well, the youngest daughter finally married at 28, even though Victoria was initially furious at the idea of her youngest daughter marrying at all -- it was her duty to stay with her mother for her entire life.  Beatrice was 17 years younger than Victoria and only four years old when her father Prince Albert died, so Beatrice spent her entire life taking care of her mother.  Eventually Queen Victoria agreed to her marriage, but only on the condition that Beatrice and her husband live with the Queen and Beatrice continue to act as her unofficial secretary.

This was a really interesting book -- lots of history, several scandals, and much of it was quite tragic.  Hemophilia ran in the family, and besides Queen Victoria's son Leopold, some of the grandsons were also hemophiliac and died young.  The second daughter, Alice, died of diphtheria which she contracted while nursing her own children, one of whom had also just died during the same outbreak.

I did have a few quibbles -- there weren't nearly enough photos, considering how many people are included in the book.  Also, though there's an excellent chart showing the immediate family tree (which runs horizontally across a two-page spread, so I was constantly turning the book sideways) I really wish the author had included a map or two.  There are a lot of references to various royal houses, palaces, and castles, and I'm a visual person, so I would have liked some geographical layout.  Also, a map of all the German kingdoms of the time would have been helpful -- four of the daughters married German princes, and there was a lot of traveling in the book back and forth between England and Germany.

The writing in this book was pretty accessible, though a bit clunky at times.  Packard has this tendency to end sections with heavy foreshadowing and dramatic flourish, as though he were writing cliffhangers.  A lot.  For example:

From those earliest years, the little girl stored up constant approbation, in reserve for the day when she would turn it disastrously loose in her adult life.  (Cue ominous music).  Or how about:

Only a fiend could have predicted that such bliss would, starting in a few weeks, begin to turn to choking dust.

I also noticed that Packard had a tendency to editorialize instead of just presenting the facts and allowing the reader to form an opinion.  For example, after the death of Beatrice's husband, there was a rift between Beatrice and her sister Louise:

Probably no family row would have occurred if [Louise] hadn't let her mouth get ahead of her brain when Liko's death was reported while the family was at Osborne. . . . It was a stupid and careless thing for one sister to tell another under the circumstances, and understandably, for a time it badly strained relations between Louise and Beatrice.

I'm sure that after spending years researching a subject for a book, a writer couldn't help but form opinions about them one way or another, but I did find a few of the comments a bit over the top.  Perhaps by merely including a quote the reader can come to his or her own conclusion about the stupid things that siblings say to each other.

Overall, though, I really enjoyed this book.  I also have several other books about Victorian history on the to-read pile, and some more royal biographies.  My book group is reading Helen Rappaport's The Romanov Sisters in a few months, and I'm also really looking forward to that one.  Bloggers, which books about Victorian history do you recommend?  Which royal biographies?
Posted by Karen K. at 10:52 AM