Shadows on the Rock by Willa Cather 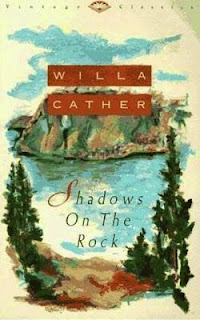 Classics Spin #9! My selection was Shadow on the Rock by Willa Cather, a book I've had on my shelves for several years. I hadn't read anything by Willa Cather for a while so I was looking forward to this one.

Published in 1931, this is a work of historical fiction starting in 1697. Euclide Auclair, the apothecary of Quebec, lives with his twelve-year-old daughter in the remote settlement of French Canadians. As the story begins, Auclair watches as the final ships sail up the river, leaving the settlement isolated for a the long winter. The story unfolds in slightly more than a year, until after the last ships leave again the final year (plus a short epilogue). Euclide came to Quebec from France years before, when Cecile was a baby, following his patron, the wealthy Count de Frontenac.

The story is divided into six books, each focusing on a different character. It's really a series of vignettes about life in Quebec, more than an over-arching narrative. There's really not much plot to speak of. The "Rock" in the title refers to the mountains surrounding Quebec, so I suppose the shadows are the stories in the book. However, Cather is masterful at creating a sense of place. I remember that was the thing I've liked best about all her books so far: the Midwest in My Antonia and  Song of the Lark; the Southwest in The Professor's House; and antebellum Virginia in Sapphira and the Slave Girl.

Here's one of my favorite passages:

. . . Cecile got away unobserved into the nearest wood. She went through it, and climbed toward the ridge in the middle of the island. At last she came out on a waving green hayfield with a beautiful harp-shaped elm growing in the middle of it. The grass there was much taller than the daisies, so they looked like white flowers seen through a driving grey-green rain. Cecile ran across the field to that symmetrical tree and lay down in the dark, cloud-shaped shadow it threw on the waving grass. The tight feeling in her chest relaxed. She felt she had escaped for ever from the Harnois and their way of living. She went to sleep and slept a long while. When she wakened up in the sweet-smelling grass, with the grasshoppers jumping over her white blouse, she felt rested and happy, -- though unreal, indeed, as if she were someone else.

I liked this book but I found it a somewhat slow read. Though the prose is beautiful, the lack of plot didn't really compel me to pick it up again. Also, I felt like the story didn't have much focus. I really enjoyed the parts about Cecile and her father and the day-to-day life of the Quebec residents and the hardships they faced, but I felt it got bogged down with some of the politics which kept the Count in Quebec, plus the competition between two rival bishops got a little boring.

Not one of my favorites by Cather, but worth reading overall. And now I only have three more books by Cather to finish -- and only 18 left on my Classics Club list!
Posted by Karen K. at 11:24 AM