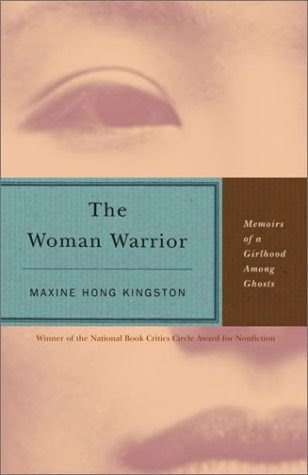 The Woman Warrior is the seventh book I read from my 2015 TBR Pile Challenge. I chose it in honor of Asian-Pacific American Heritage month, and though I finished this book almost two weeks ago, I'm having a really hard time writing about it.

Published in 1975, The Woman Warrior is Maxine Hong Kingston's memoir is the story of growing up as a child of Chinese immigrants, but it's not just about her -- it's really about the experiences of the women in her family, both in China and after arriving in the United States. It's a fairly short book, just over 200 pages, and is divided into five sections. Each of the sections is centered around a different woman in her family -- herself, her mother, and her aunts. The book is beautifully written, but mostly heartbreaking. The parts that really got to me were how badly women and girls were treated. The first chapter starts with story of an aunt, her father's sister, who got pregnant after her husband had left for America to make his fortune, and her shame was so terrible she threw herself and her newborn child into a well. Kingston doesn't even know her aunt's name -- the shame is so terrible that her name is never mentioned, and she is instructed never to speak of it to her father.

There's also a chapter about her mother's sister, who came to the United States to confront the husband that had left her and a daughter behind in China years before; a chapter about her mother studying to be a doctor in China after her husband had gone to America; and a retelling of the Fa-Mulan woman warrior myth. Although it's considered a nonfiction memoir, there are definitely elements of fiction woven throughout. Like some of the earlier memoirs I posted about this year, I did wonder a bit how much was fact and how much was fiction.

Overall, I liked it, but it was a difficult read at times -- it becomes really painful sometimes to read how badly women are treated in many cultures. It's also tough to read about how difficult it is for the children of immigrants who are caught between two different cultures.
Posted by Karen K. at 9:04 AM