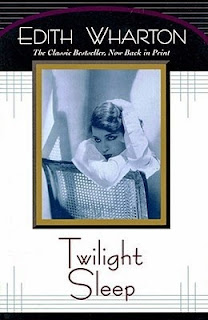 Well, it had to happen sometime: Edith Wharton has finally disappointed me. Twilight Sleep is the thirteenth book by Wharton that I have read, and it is officially my least favorite. Hardly anyone has reviewed this book on Goodreads, and my library doesn't even own it.

The set up is a little complicated. Published in 1927, this is the story of the Manford family, rich socialites living in New York in the 20s. Pauline Manford is the busiest rich woman in the world, with a schedule so jam-packed with committees, speeches, beauty treatments, appointments with new-age gurus, and social engagements, she has to schedule time in 15-minute increments, including a conversation with her own daughter Nona, who is 19. Nona is Pauline's daughter by her second marriage, to the successful lawyer, Dexter Manford, who represented Pauline in her divorce from her first marriage to Arthur Wyant, after Arthur had an affair with his cousin. Pauline also has a son, Jim Wyant, from her first marriage, and his own marriage is on the rocks. Jim's wife Lita is a Jazz Age party girl with a hankering for the stage, to the dismay of her husband's family. Following all this?

The story takes place over a fairly short period of time, in which Pauline is determined to devote her do-gooder energies to saving Jim's marriage to Lita, not realizing that her own marriage is crumbling and that her daughter Nona is in love with Arthur Wyant's cousin, who is trapped in a loveless marriage to a pious woman who won't divorce him. Lita is determined to leave Jim and go out to Hollywood. Dexter claims he merely wants to prevent a family scandal, but he's clearly falling for Lita himself, and all the characters are thrown together at the end in a climactic scene in Pauline's country estate. (I'm actually trying to mentally recast with all the characters from Downton Abbey, except Michelle Dockery would have to be the daughter-in-law and we wouldn't have the wonderful Maggie Smith as the Dowager Countess).

I rather liked this novel but I was sort of puzzled by it. It starts out describing Pauline's busy life and packs in all the other characters in such a rapid succession I could hardly follow them. I suppose Wharton is trying to show the fast pace of life in the twenties and the whirlwind schedules of these wealthy characters, but I just found them shallow. I hadn't ready any Wharton books in a while but I do remember that typically the character development was better and the pace was slower. 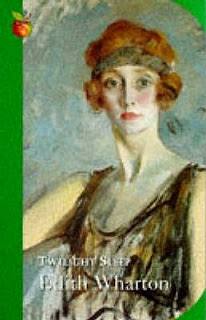 Wharton is known for her novels about rich society people who are unhappy. Pauline seems shallow but has so much energy, it made me wonder what this character could have done if she had lived in the 21st century -- she could have been a CEO of some Fortune 500 company instead of filling her time with making inspirational speeches, visiting charlatans trying to do emotional healing, and doing eurythmic exercises.

I suppose this novel is supposed to be a satire of the Jazz Age, and she does get in some good shots about society types. My favorite bit in the entire novel is when Pauline and Dexter both decide to visit Lita's eccentric aunt, Kitty Landish. Kitty's latest obsession is remodeling her home, No. 1, Viking Court, in the authentic style of the Vikings who just may have landed close by hundreds of years ago:

. . . the room contained only a few relentless-looking oak chairs, a long table bearing an hourglass (for clocks would have been an anachronism), and a scrap of dusty velvet nailed on the cement wall, as to which Mrs. Landish explained that it was a bit of a sixth-century coptic vestment, and that the nuns of a Basilian convent in Thessaly were reproducing for eventual curtains and chair-cushions. "It may take fifty years," Mrs. Landish always added, "but I would rather go without it than live with anything less perfect."

So. Overall, not a terrible read, but not up to what I normally expect from Edith Wharton. I was originally going to count this as my 20th Century Classic for the Back to the Classics Challenge, but since nobody reads it, I don't really think it applies.  I still have some novellas and a couple of her earlier works on the TBR shelves. Hopefully they will not disappoint.
Posted by Karen K. at 11:40 AM