The Spirit Catches You and You Fall Down by Anne Fadiman 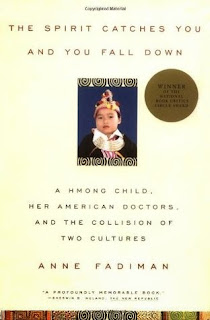 I think the best thing about Adam's TBR Pile Challenge is that it inspires me to read those books that have been hanging around the bookshelves for far too long -- it's just wonderful to find treasures that I've been ignoring for far too long. The Spirit Catches You and You Fall Down is exactly that -- one of those books that I really regret putting off for so long.

This award winning book is the story of the clash of cultures between the immigrant Hmong refugee community in Merced, California, and the doctors treating a young Hmong girl, Lia Lee, who showed symptoms of severe epilepsy starting at three months of age. She was first diagnosed in 1981. Her parents were refugees from Laos who resettled in California after the Vietnam war. The Hmong people are an ethnic minority living who are originally from the mountainous region of Southeast Asia, including China, Vietnam, Cambodia, Laos, and Thailand, but they are fiercely independent and have never assimilated into any of those national cultures. Many Hmong people fought secretly for the CIA during the Vietnam War and for the Laotian Civil War in the 1970s. After fleeing to Thailand, the Lee family eventually settled in Merced, about two hours west of San Francisco, where there is a large population of Hmong refugees and their families.

The book traces the cultural clash between Lia's family and their beliefs in traditional Hmong medicine and the American hospitals and staff, but it's also much more than that. There's a lot of background about the Hmong people and the wars in Southeast Asia, and most of the book is really about the cultural differences and how difficult it is for immigrants to adapt. It also makes a serious point about medical practitioners and cultural sensitivity. After I finished the novel, I went online to read more about Ms. Fadiman, and I found that this book is now required reading at Yale Medical school, and has had a strong influence in how medical professionals are now interacting with immigrant groups.

I found this book to be absolutely fascinating, extremely well-written and organized -- it's definitely one of my top reads of the year. I could hardly put it down and read it in just a few days, and I've been recommending it over and over to co-workers and library patrons. It would be a great selection for my non-fiction book group at the library, but unfortunately our system doesn't have enough copies -- maybe I'll have to persuade them to order some more so that we can put it on our reading list for next year.
Posted by Karen K. at 10:57 PM