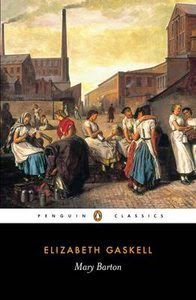 Mary Barton was the first novel published by Elizabeth Gaskell, author of one of my very favorite books, Wives and Daughters. I'd had it on the TBR shelves for several years, and now that I'm getting down to the final books on my Classics Club list, I thought it was time to give it a try. (This also counts for the Reading England Challenge.)

Set mostly in Manchester around 1840, Mary Barton is the story of two working-class families, the Bartons and the Wilsons. Barton and Wilson both work for the mills. Mr. Barton has a pregnant wife, a daughter Mary, aged about 13. Mr. Wilson has small twin sons, probably toddlers, and an older son, Jem, who's about 18. Mrs. Wilson has a disability from an accident she suffered before she was married.

Mrs. Barton is grieving because her sister, Esther, has run off to be with a man, and they fear the worst. Soon after, tragedy strikes both families; Mr. Barton is depressed and becomes more and more involved with labor unions and the Chartist movement.

Meanwhile, Mary has grown into a beautiful young woman, apprenticed at a dressmaker. Jem becomes a skilled worker, working with the factory machines. He's in love with Mary but her head's been turned by the attentions of Harry Carson, the mill owner. Times are bad at the mills, with job cuts at the worst possible time. Resentment between the workers and the mill owners comes to a head just as Mary's two lovers have a confrontation. After another tragedy, Mary is caught up in the middle of all this, and her loyalties are tested. 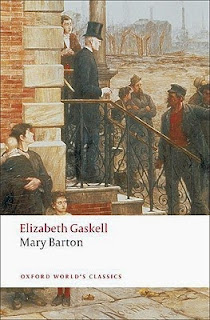 I liked this book, but it doesn't have nearly the charm or the characters of Wives and Daughters, North and South, or even the quirky Cranford. I found the characters rather one-dimensional, especially Mary, and the story itself is on the preachy side. It's also a little melodramatic and predictable. Still, it's interesting to read one of her early works. Mary Barton shows glimmers of  Elizabeth Gaskell's great talent as a writer. I still have Sylvia's Lovers on the TBR shelves, plus some of her Gothic tales. Has anyone read either of those?
Posted by Karen K. at 9:41 AM