A Roundup of Victorian Mini-Reviews

Or more precisely, a round up of mini-reviews of Victorian and Victorian-related works. (I like my title better). Anyway, I'm making really great progress on my Victorian Reading Challenge -- so far I've finished 16 of the 31 categories I want to complete and written reviews for nearly all of them. However, I've gotten behind on posts for the past few weeks and since three of them seem to go together, I thought I'd write up some mini-reviews and get on with it. 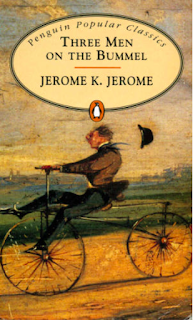 Three Men on the Bummel by Jerome K. Jerome. This sequel to the beloved Three Men in a Boat has J and his friends George and Harris reunited for a summer bicycling tour through Germany. A good chunk of the book is devoted to the preparations for the trip (made more complicated by the wives and children of the three, who are not joining the party) and the usual funny asides when an incident reminds J of a funny story. Though not quite as fun as the original, this book has some great moments. It's pointless to describe them, so I'll just include one of my favorite passages. Sadly, the dog Montmorency isn't included in this story, but I had to include this bit which does include dogs.

This quote is a bit long, but it's one of my favorites from the whole book:
. . . in Germany most human faults and follies sink into comparative insignificance beside the enormity of walking on the grass.  Nowhere, and under no circumstances, may you at any time in Germany walk on the grass.  Grass in Germany is quite a fetish.  To put your foot on German grass would be as great a sacrilege as to dance a hornpipe on a Mohammedan’s praying-mat.  The very dogs respect German grass; no German dog would dream of putting a paw on it.  If you see a dog scampering across the grass in Germany, you may know for certain that it is the dog of some unholy foreigner.

In England, when we want to keep dogs out of places, we put up wire netting, six feet high, supported by buttresses, and defended on the top by spikes.  In Germany, they put a notice-board in the middle of the place, “Hunden verboten,” and a dog that has German blood in its veins looks at that notice-board and walks away.  In a German park I have seen a gardener step gingerly with felt boots on to grass-plot, and removing therefrom a beetle, place it gravely but firmly on the gravel; which done, he stood sternly watching the beetle, to see that it did not try to get back on the grass; and the beetle, looking utterly ashamed of itself, walked hurriedly down the gutter, and turned up the path marked “Ausgang.”

As I'm currently living in Germany, I found this very amusing. Germany is a nation that takes rules and regulations extremely seriously.
I'm counting this as my New To You Book by a Favorite Author. 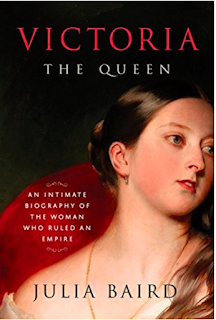 Victoria: The Queen by Julia Baird. I was inspired to read this after finally watching the new Masterpiece production of Victoria, which had a lot of comments on one of my favorite non-book blogs, Frock Flicks, at which historical costume experts discuss (and sometimes destroy) historical film and TV adaptations. Yes, Lord Melbourne wasn't nearly as dishy as Rufus Sewell, but Queen Victoria was a little bit in love with him. Overall the book is well-written and engrossing, but I got a little bored with Victoria's life towards the end, but maybe there really wasn't that much to say; at that point I think the lives of her children are more interesting -- I recommend Victoria's Daughters by Jerrold M. Packer, which I reviewed a few years ago.

I'm counting this as my Book About Queen Victoria (fiction or non-fiction). 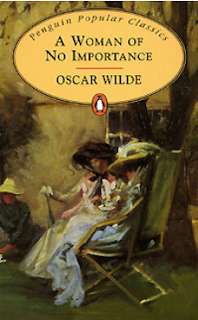 A Woman of No Importance by Oscar Wilde. Another drawing room comedy, but with more dramatic elements. Taking place over just a couple of days at a country house party, young George Arbuthnot has just landed a plum job with the worldly and sophisticated Lord Illingworth. His mother is dead set against him taking the job, because she has a Deep Dark Secret. The third play I've read by Wilde,  and though it has some witty moments, it's my least favorite so far. Here are a few of his trademark bons mots:

“After a good dinner one can forgive anybody, even one’s own relations.”

“To get into the best society, nowadays, one has either to feed people, amuse people, or shock people - that is all!”

I'm counting this as my Play or Book of Short Stories for the Victorian Reading Challenge. 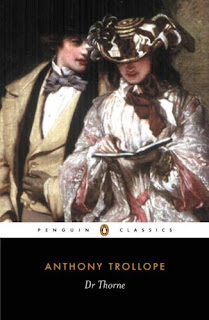 Doctor Thorne by Anthony Trollope. Third in the Barchester Chronicles, it's the story of Mary Thorne, the relatively poor niece of a country village doctor, and Frank Gresham, eldest son of the local squire whose family is pressuring him to marry for money. I was looking for a good audiobook and realized I could get Doctor Thorne (probably my favorite Trollope novel) via digital download from my library; also, I got my hands on a copy of the Andrew Davies TV adaptation and wanted to refresh my memory before watching the DVD -- I hope that wasn't a mistake! Nevertheless, I loved it nearly as much as when I read it the first time -- I did get a little disgusted by the snobbery and hypocrisy of the Greshams and their wealthy cousins, the DeCourcys, who believe that family connections are everything until they need a massive infusion of cash. A great story, though.

I'm counting this as my Victorian Re-Read.