London Belongs to Me is Incredibly Long But Worth It 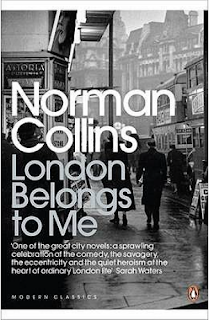 I love a big fat book. I love to sink into the story and get completely engrossed in the characters. I also love British books, and books set during World War II. I especially love books about the War at Home -- I'm far more interested about how the war affected people's everyday lives than battles and military maneuvers. In short, Norman Collins' London Belongs to Me basically ticks off every box for my literary love. It took me almost a month to finish it since I was reading other books as well, but I loved every minute of it.

First published in 1945, this story starts in 1938 and spans about two years in the lives of the residents of #10, Dulcimer Street, in Kennington, London, a working-class neighborhood south of the Thames river (not to be confused with the much posher Kensington). The story begins just before Christmas, when one of the residents, Mr. Jossor, leaves his last day of work at an accounting firm upon his retirement and returns home to his flat. Mr. Josser lives with his wife and adult daughter Doris, who's ready to fly the nest and share a flat with another girl, much to her mother's chagrin. Other residents of the building include Connie, a failed middle-aged actress who's barely scraping by as a coat-check girl; the adenoidal Mr. Puddy, who can hardly hold down a job as a night watchman and is hoarding canned goods for the onset of war; Mrs. Boon and her son Percy, a mechanic who's tempted by a life of crime; the widowed landlady Mrs. Vizzard; and the mysterious new lodger Mr. Squales.

This is a novel in which for most of the characters, not much happens and yet everything happens. Over 738 pages, we follow the lives of the residents as they fall in and out of love, find jobs, have dreams and aspirations, and sometimes even land in jail. They're a disparate group but ultimately, they're like a family. I love books in which a lot of personalities are thrown together and this is exactly that sort of group. It reminded me a little bit of Patrick Hamilton's The Slaves of Solitude which I read and loved a few years ago.

This book is long and sprawling, with very thin pages and tiny print, yet I was sorry that it ended. The writing isn't particularly flowery or descriptive, but Collins made me feel as though I were right there, living in the same building, and all the characters were incredibly real. There's a short epilogue that takes place at Christmas 1940 which gives a quick update, but I can only imagine what happened to all the characters during and after the war. I wish there were a sequel, but sadly, there isn't. However, thanks to Rachel at Book Snob (who raved about this book), I discovered that it was made into a film which you can watch online at YouTube (though I cannot imagine how they condensed this doorstopper into a film less than two hours long.)

Collins also wrote several other books and I've already got Bond Street Story which is also available from Penguin, though it's surprisingly expensive for a paperback (luckily I received a copy as a Mother's Day gift). It's also quite long, but not as long as London Belongs to Me. This book is my idea of perfect summer reading and I'm sure it will be on my list of favorites at the end of the year.
Posted by Karen K. at 9:47 AM