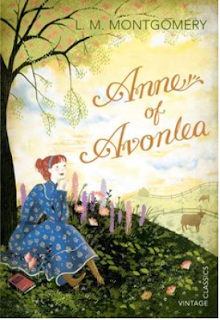 I think I am the only woman raised in North America not to have grown up loving Anne Shirley. Somehow, I completely missed this book growing up -- I think I must have confused her with Heidi or Rebecca of Sunnybrook Farm, who always sounded so saccharine and sentimental. (If you are a fan of either, I apologize. Maybe I need to give them a try as well).

I finally got around to reading Anne of Green Gables by L. M. Montgomery about 10 years ago when my someone (possibly me) gave my then nine-year-old daughter a beautiful illustrated copy. I thought it would be fun for us to read the same book, and I also suggested it to my own mother, who'd never read it either. Well, I don't know if my daughter ever finished it, but Mom and I both did, and we loved it. (My mother went on to complete the entire series, though I don't know if she ever moved on to Emily of New Moon or any of Montgomery's other works.)

But I digress. When I decided to include the Children's Classic category in the Back to the Classics Challenge this year, I knew right away I wanted to read the next book in the Anne series. Anne of Avonlea picks up soon after the end of Anne of Green Gables (which I reread after Christmas to refresh my memory). Anne has returned to Avonlea after earning a teaching certificate, and starts a job at the village school. Though she's grown up and gets into less scrapes than the previous book, there are still funny moments, and more comic relief is provided by a grumpy new neighbor, Mr. Harrison, and six-year-old Davy Keith, one of a pair of twins adopted by Marilla after their mother, a distant cousin, has died. (The other twin, Dora, is so perfect that even Marilla admits the child has almost zero personality). 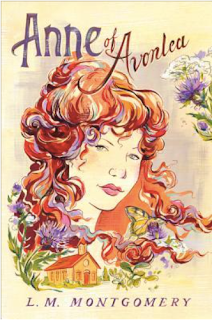 There's not so much an overarching plot as just episodes in her life over a couple of years, as she becomes confident as the teacher of unruly pupils, starts a village beautification society, and meets new and interesting characters as she wanders around Avonlea describing how beautiful and picturesque life is. (If you don't like rambling descriptions, this is not the book for you). There are tragic episodes and funny episodes, but I almost felt like this book was just filling space until the next book. Also, if you are looking for a budding romance for Anne and Gilbert Blythe, it's not here. Gilbert is teaching school in a neighboring town and he's barely mentioned. However [highlight for spoilers] they both go off to the same college in the following book, Anne of the Island. I'm pretty sure that's where their relationship really starts.

Anne of Avonlea is a pleasant, gentle read, and I can see why it's popular all over the world -- it's a very bucolic story where nothing very terrible happens to anyone, sort of an idealized vision of rural life in the early 20th century. It's been translated into many languages and I know it's very popular in Japan. I read a free digital download version and enjoyed looking at all the different cover images -- there are so many, good and bad, I think it's time I did another Awful Book Cover post.

I'm counting this as my Children's Classic for the Back to the Classics Challenge.
Posted by Karen K. at 3:02 AM

Labels: Back to the Classics 2018, children's classics