Christopher and Columbus by Elizabeth von Arnim: One Book Down, 99 to Go 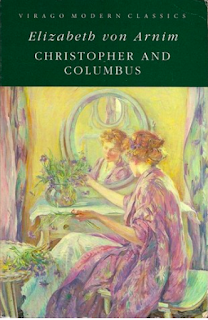 Halfway through the first month of 2018, and I have completed exactly two books. That's it. If I plan on completing my goal of 100 books this year, I need to get cracking.

In my defense, I was traveling for a week right after Christmas (will post photos soon), and we had a houseguest for another week, which included more travel (day trips to Trier, Luxembourg, and Strasbourg). But now the weather is cold and windy, and it's a good time to hide in my burrow and read those stacks of books.

So. My first book of 2018 was Christopher and Columbus, a rather oddly titled humorous novel by Elizabeth von Arnim. It was the first book on my 2018 TBR Pile Challenge list, so that was a good place to start. And though it is a charming book, the only explorers are in the metaphorical sense.

Published in 1919, Christopher and Columbus is the story of 17-year-old twin sisters, Anna-Rose and Anna-Felicitas. It's set in the early part of WWI, and the twins, orphaned, half German and half English, are living rather uncomfortably in England with an aunt who loves them and an uncle who does not, in a town where the presence of anything remotely German is suspect. Though their mother was very English and they mostly grew up in England, they look German, sound German (a great many mentions of their inability to lose the German "R"); and have a German last name -- von Twinkler.

Not surprisingly, the unhappy uncle by marriage decides that the anti-German sentiment is too high, and the twins must go. He packs them off to America, which has not yet entered the war, with 200 pounds and letters of introduction to friends in Boston and California. On board ship, though they are traveling second-class, Anna-Rose and Anna-Felicitas find a savior and protector during a ship's emergency -- Mr. Twist, a thirtysomething bachelor without much hair but with lots of money. This sounds like it could become sordid very quickly, but in fact, Mr. Edward Twist is a kind and noble soul. Though he made pots of money inventing a dripless teapot, he is taking a break from driving an ambulance for the war effort, returning to America to visit his widowed mother.

Mr. Twist notices their vulnerability and takes the twins under his wing. He keeps a close eye on them the remainder of the trip, and tries to escort them to their new home in America. Things don't turn out as planned, and naturally the twins turn to him for help in an unfamiliar country. I wish I could say hilarity ensues, but not really. It's mostly charming and gently funny, but there's always an undercurrent of how vulnerable these girls are, how much anti-German prejudice exists, and obviously, the possibility that this tale could quickly become rather sordid. Indeed, many times there are hints and allegations that Mr. Twist is up to no good -- by other characters, not by the author (the only exception is Mrs. Twist, his manipulative mother, who decides that it is the twins that are up to no good. This is resolved in one of the book's most satisfying scenes).

Overall, I enjoyed this book, though I did find the twins a little twee. They didn't seem to have much character development other than their fondness for each other, and for their beautiful golden ringlets. Yes, it's the nineteen teens, but these girls felt more like 12 year olds than 17 year olds. Plus, there is the underlying ick factor of these 17 year old girls -- Mr. Twist may have had the noblest of intentions, but there are other men in the book who clearly do not. There's also some racism regarding people of color they meet along the way, all of whom are in service positions, particularly a Chinese cook. The book does make some very good points about the anti-German sentiment which is not as surprising given the anti-immigrant feeling in the world today.

Of course, everything turns out all right in the end. I've now read six of von Arnim's works, and would rate this about the middle of the pack. If you are a fan, you will probably enjoy this book, but I don't know if I'd recommend it as a first read if you've never read her before.
Posted by Karen K. at 6:20 AM