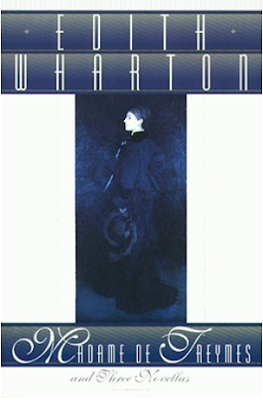 It's been quite a while since I read anything by Edith Wharton. She's the author of some of my favorite novels, and I've read nearly all of her most popular works. When you get to the little-known works of a famous author, it's always something of a crapshoot -- are they less popular because they're simply overshadowed? Or is it because they're just not that good? My last two books by Wharton were The Glimpses of the Moon, which I loved, and Twilight Sleep, which was just okay.

Madame de Treymes and Three Novellas includes four of Wharton's shorter works from various times in her career. I actually read these out of order, mostly because they were also available on iBooks and I read them in bits and pieces, mostly on my phone. It's kind of hard to review them all in one post, but I'll give it a go.

Bunner Sisters is probably the most well-known of the novellas. Written in 1892 but unpublished until 1916, it's one of her few works not about upper-crust New York society. Spinster sisters Ann Eliza and Evelina are existing in near-poverty, working and living in a tiny shop where they make and sell hats, bonnets, and trimmings. Ann Eliza splurges and buys Evelina a clock for her birthday, and the two sisters both fall in love with the local clockmaker, the meek Mr. Herbert Ramy. What seems like a way out of poverty for at least one of them ends badly, of course. If you've ever read anything by Wharton you'll know her books rarely have happy endings. 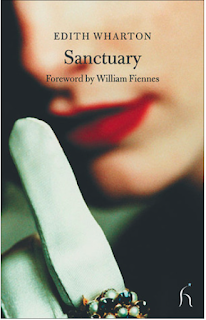 In Sanctuary, Kate Orme seems to have it all -- youth, beauty, position, and she's engaged to marry eligible bachelor Denis Peyton, who recently inherited a pot of money from his scandalous stepbrother. However, Kate learns the terrible secret behind the inheritance, and struggles to decide if she should marry someone with such a lack of character -- and if she does, will her children inherit their father's morals, or whether she her influence will be enough. This one was my least favorite.

The Touchstone is another story about a moral crisis. In this case, Stephen Glennard, a young lawyer, is in love but struggling financially. He wants to marry, but doesn't have enough to support a wife, and to keep the woman he loves from moving abroad with a rich relative, he struggles with a decision to publish some very personal letters written to him by a very popular writer who has since died. It seems like the right thing to do, but eventually he has a crisis of conscience.

Madame de Treymes is actually the shortest of the four, only about 80 pages, but I ended up reading it last. While in Paris, a wealthy American, John Durham, has reconnected with an old acquaintance, the former Fanny Frisbee, who had married a French nobleman but is now separated from him. Durham wants her to divorce her ne'er-do-well husband and marry him, but Fanny is certain his family would never permit the scandal of a divorce. Durham appeals to her sister-in-law, the eponymous Madame de Treymes, and doesn't know whether he can trust her to assist them in persuading the family to allow the divorce.

Overall, I enjoyed the novellas, but I'd forgotten that Wharton can be kind of wordy and very introspective, and her plots tend to move rather slowly. All the novellas have themes about decisions and moral crises, though Bunner Sisters seems rather the odd book out simply based on the class and financial circumstances of the subjects.

I still have three more books by Wharton unread on my shelves -- The Children, Hudson River Bracketed, and The Fruit of the Tree. I was thinking about reading one of them for the Back to the Classics Challenge. Bloggers, have you read any of them? Which do you recommend?