Wives & Daughters by Elizabeth Gaskell is the Ultimate Victorian Novel

OK, I guess I've said that about other novels before -- probably about Bleak House. But this is one of my all-time favorite books -- I think I've read it three or four times in the past 10 years since I discovered it, in print and audio, and I've seen the TV adaptation multiple times. It's just wonderful. I have so many books that I want to read that I don't re-read old favorites nearly enough. This is worth making an exception.

If you're not familiar, here's the setup. Basically, it's the story of two families, the Gibsons and the Hamleys, living somewhere in the town of Hollingford in the late 1820s (it's before the Reform Act of 1832, and there's mention of a King but not Queen Victoria). Mr. Gibson, a widower with a young daughter Molly, is the local surgeon, and the Hamleys are one of the oldest families in the county, even older than the local gentry. Squire Hamley has two sons off at Cambridge and an invalid wife. The two families become closer when young Molly, aged 17, goes to stay at Hamley Hall because one of her father's medical apprentices has decided he's in love with her. Mr. Gibson realizes Molly is too old to be unchaperoned in the house with the two medical students while he's out taking care of patients, so she goes off to spend time with Mrs. Hamley.

Molly endears herself to the Squire and the kind Mrs. Hamley, but the old-fashioned though kindly squire has no intention of either of his sons falling in love with Molly. During Molly's visit, her father spends a lot of time at the Towers, the ancestral home of the local gentry, the Cumnors. There he meets the widow Mrs. Kirkpatrick, a schoolmistress and former governess of the Cumnor family. He decides pretty quickly she'd make a suitable stepmother for Molly. 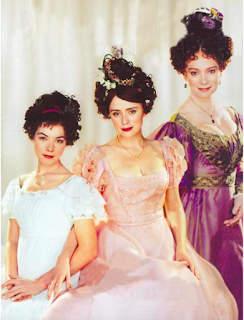 Molly is less than thrilled to acquire a stepmother but is happy to be getting a new stepsister, Cynthia, who's been off at school in France for pretty much her entire life since her father died. The new Mrs. Gibson isn't the stereotypical evil stepmother, though she is pretty self-centered and mildly annoying. However, Molly and Cynthia really and truly care for one another.

Meanwhile, the Hamley sons have returned from Cambridge, and are much thrown together with the Gibson family. The elder son Osborne is dreamy and poetic, with a Big Secret, and his loyal brother Roger is clever and scientific. 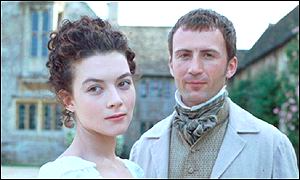 Molly with Roger Hamley. He's supposed to be the less-attractive brother.

There is tragedy, there is comedy, and there are secrets. It's a really great domestic story with lots of charming characters. It's very reminiscent of Jane Austen without being a knockoff, and has the added bonus of weighing in at about 650 pages, much longer than any of Austen's novels. It's lovely to spend a good long time with these characters in their world.

I loved all the characters, even Mrs. Gibson who often made me roll my eyes and practically throw something across the room. (I listened to parts of it on audio while driving and walking the dog and sometimes yelled out loud at her). Squire Hamley has no patience for Mrs. Gibson and is rewarded with the best line in the entire book: 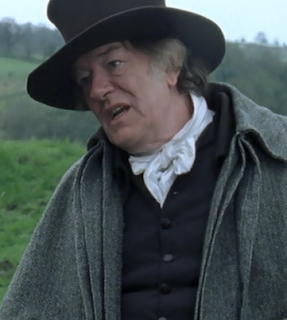 "I'm not saying she was silly, but one of us was silly, and it wasn't me."
(Yes, that's Michael Gambon [AKA Dumbledore] as the Squire).

And I haven't even talked about the miniseries, which is BRILLIANT -- so many great actors! If you've watched a British TV series in the past decade, you'll recognize nearly all the leads and much of the supporting cast as well. I actually saw the miniseries first and I've since read the book three times. It never gets old and Elizabeth Gaskell has become one of my all-time favorite Victorian novelists -- North and South is also wonderful, and Cranford is a hoot. I only wish Gaskell had lived long enough to write more books! Wives and Daughters is actually unfinished as she passed away before completing the final short chapter of the book; however, it had been serialized and she had left detailed notes with her publisher which are included, though the ending is pretty much self-explanatory.

I'm counting this for the Re-Read a Favorite Classic category for the Back to the Classics Challenge.
Posted by Karen K. at 1:32 PM