I had really high hopes for this book -- a classic book, in translation, and a German classic no less! I really want to read more German books in translation (of course I don't read the language well enough to read the originals.) Sadly, there just aren't that many German books translated into English -- I guess the proliferation of American and British books just makes it that much harder to get attention from the English-reading public.

Anyway. I had heard about this book years ago and this felt like the right time, as I'm now living in Germany and Persephone Books reprinted Effi Briest last year, though they don't often publish books written by men. I'd heard it was sort of a German version of Madame Bovary. Well, to be honest, it is and it isn't. This review includes spoilers, so stop now if you don't want to know what happens.

The book begins with Effi Briest, seventeen and unmarried, still very much a schoolgirl. She's basically playing in the yard one day when she receives a proposal of marriage from a civil servant, Geert Instettan, a man more than twice her age who was once in love with her mother.  No, that's not creepy AT ALL. (Of course he was about her mother's age and obviously too young, as Madame von Briest married a much older man). 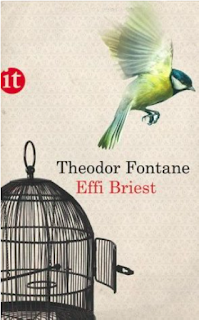 Anyway, she's very young and he's basically middle-aged and serious. They move off to town on the Baltic coast (which actually sounds lovely) and after giving birth to a daughter, Effi becomes bored. Her head is turned by a military officer named Crampas and they have an affair, which is basically them going on rides and walks together in the dunes. Eventually, her husband is transferred to Berlin so the affair ends. Years later, Effi is visiting a spa for her health and her husband finds a bundle of letters from Crampas and the inevitable happens. Naturally it ends badly for Effi.

Somehow this book disappointed me. I suppose I was expecting it to be more like Emma Bovary, whom I found a fascinating train wreck, but this book just dragged. I don't know if it was the translation or the writing style, but it took me nearly a month to finish this book which is just over 300 pages. Effi was certainly a sympathetic character, but I really didn't get a sense of great passion for Crampas. It was all very matter-of-fact -- I was expecting more scandal or dramatic tension, I guess. Even the ending wasn't terribly dramatic. I haven't read much German literature but I do remember that the writings of Goethe caused such a sensation that young people were literally committing suicide after reading The Sorrows of Young Werther (which I did try to read a few years ago and just could not get through). 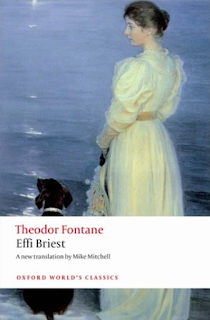 I haven't given up on German literature yet -- I do have a copy of Thomas Mann's Buddenbrooks that looks interesting, though quite long. And recently I got completely hooked on the TV series Babylon Berlin which is set in 1929 -- I do love the time period between the wars, and I'm curious to learn more about the German perspective. It's based on a series of books and some of them have been translated into English, so I'll try to get my hands on a copy. (It's streaming in the U.S. on Netflix and it's really good, I highly recommend it). Can anyone recommend any other German books available in translation?

I'm counting this as my Classic By a New To Me Author for the Back to the Classics Challenge.
Posted by Karen K. at 4:17 PM