Lucy Gayheart by Willa Cather is Beautiful and Tragic 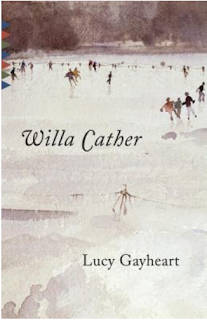 After making up my list for the TBR Pile Challenge, I realized that quite a few of my selections were in the 500+ pages range. I was planning to read Testament of Youth in March for Women's History Month, but I'd just finished Wives and Daughters and was rather hesitant to start another 700 page behemoth right away. The answer was of course a nice short book -- Lucy Gayheart by Willa Cather.

One of her later works, it's set at the turn of the century but actually written in 1935, and is her penultimate book. The story begins in the small town of Haverford, Nebraska, somewhere west of Lincoln. Young Lucy Gayheart is home for the holidays. She's 18 and is a talented pianist, and has been working in Chicago. The story begins as she's out skating with Harry Gordon, the most eligible young man in town. He fancies himself in love with Lucy, and plans on marrying her and making her his most prized possession, but unbeknown to him, Lucy has dreams and aspirations that don't include spending the rest of her life in a small town.

The moment she shut the door on the baggage man, she seemed to find herself again. Out there in Haverford she had scarcely been herself at all; she had been trying to feel and behave like someone else she no longer was; as children go on playing the old games to please their elders, after they have ceased to be children at heart.

After the holidays, Lucy returns to Chicago, where she teaches piano and finds another job as a part-time accompanist to a famous singer named Sebastian Clement. Lucy is dazzled by his talent, and eventually falls in love with him, despite a large age difference, and the fact that he is married. She's unsure if he returns her feelings, but Harry visits her from Nebraska for the Opera season and she's forced to make a decision between a secure future with Harry and her dreams of Sebastian and a musical career.

There's a major plot twist about halfway through the story, and it appears that Lucy's dreams are shattered. The second half of the novella deals with Lucy's attempts to comes to terms with her past decisions, and with her future.

I had expected this to be similar to her earlier book The Song of the Lark, which is about a young woman from Colorado who also moves to Chicago to study music, but they're actually quite different. It's been several years since I read it, but The Song of the Lark deals much more with a young artist dealing with a developing career and interacting with other people. I think Lucy Gayheart is much more about there personal relationships than about her career -- it's the personal aspects that drive the story, not her career aspirations. I would say they're two different possibilities of how a person's life could change. 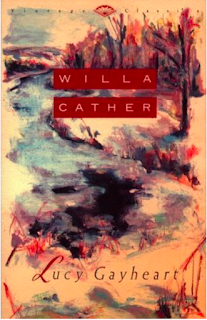 I actually enjoyed Lucy Gayheart much more than The Song of the Lark -- it's definitely one of her best works, though I wouldn't have minded if it were longer (I actually thought the final section was a bit rushed and would have liked to have seen a little more character development among some of the secondary characters). I did love all the descriptions of both Nebraska and Chicago, two places where I've lived and loved. I particularly enjoyed some of the mentions of Chicago -- there's a scene where Lucy and Harry visit the Art Institute, and Cather mentions the famous lions on the front steps, and the French Impressionists (which don't impress Harry much!). Parts of the book also reminded me a little of Ethan Frome, which is one of my all-time favorite books.

This is my fifth book for the TBR Pile Challenge 2018, and I've now read all of Cather's works except the short stories and Alexander's Bridge, which is her first novel.
Posted by Karen K. at 2:51 PM