Peony by Pearl S. Buck: Not so Much About Flowers

I'm still really trying to read as many books as possible this year from my own shelves. I made a pile of books that I could count towards the Back to the Classics Challenge, and one of them was Peony by Pearl S. Buck that I received as a Christmas gift several years ago. I really liked The Good Earth; also, I'm really enamored of all the beautiful covers of Buck's novels that were published a few years ago by Moyer-Bell. I think they're out of print now but most of them are still reasonably priced.

Published in 1948, Peony is set approximately 100 years earlier. It's the story of a young bondwoman who was adopted/indentured from an orphanage to a Jewish merchant family living in Kaifeng. At the beginning of the story, Peony is about 17 and is in love with the only child of the household, the handsome David who has been unofficially betrothed since infancy to Leah, daughter of the rabbi.

David's mother is pushing the match but David's father Ezra, who is half-Chinese (by his late father's concubine) is less concerned. David thinks he is in love with Kuelan, whom he's never actually met but is the daughter of successful Chinese merchant. Ezra realizes this would be a strategic business move. Meanwhile, Peony has to hide her love for David, realizing he can never marry her, but she begins to manipulate the situation so that she can guarantee a place in the house as long as possible. 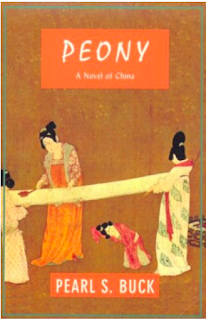 David is torn between pleasing his other and marrying Leah, whom he likes but doesn't love, and following his own heart and marrying Kuelan. He's also torn between his Jewish faith and continuing the family heritage, or assimilating further into the Chinese culture that has welcomed his family. There is mention of atrocities done to Jews in other lands, particularly Palestine, and there may also have been pogroms at that time period to which they are referring. Meanwhile, Peony doesn't have many choices as a bondwoman -- I'm really not sure if she ever had the ability to leave the house or if she was actual chattel.

The best parts of Peony are the descriptions of life in China. Pearl Buck really knew her subject, but I don't think lyrical writing is really her strong point, compared to Graham Greene which was my previous read. The dialogue in particular is pretty stiff. And the character development in this book is really not great. In particular, Leah has very little character development except for being Beautiful and Good, plus some other throwaway characters and mustache-twirling villains with little or no explanation.

However, the book has a really interesting premise -- I knew there were ethnic Muslims in China, but I didn't know about the history of the Jews. It was actually really refreshing to read about Jews who weren't being persecuted and were accepted. Overall, I think it was either too short or overly ambitious. There were a lot of unresolved storylines and characters that weren't especially developed, and the ending seemed pretty rushed -- Buck basically wrapped up years of family history (and the Jewish population of Kaifeng) in just one or two chapters at the end. I almost feel like either it should have been longer, or she should have narrowed the focus.

Buck did base the story of the Kaifeng Jews on historical research, and my edition did have some really interesting end notes with the history. I also own East Wind, West Wind in a Moyer-Bell edition, plus a couple of her other novels in mid-century editions -- you can find them pretty cheaply at used bookstores and library sales.  I think I have Imperial Woman, The Living Reed and The Three Daughters of Madame Liang. Hopefully I'll get to one of them in May for Asian-Pacific Heritage month.


I'm counting this as my Classic with a Single-Word Title for the Back to the Classics Challenge.
Posted by Karen K. at 3:33 AM

Labels: Back to the Classics Challenge 2018, China, historical, mid-century