Fenny by Lettice Cooper: An Expat Living in Italy 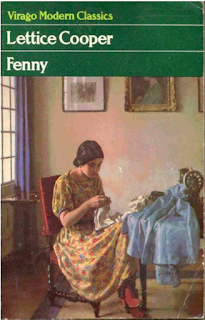 I bought Fenny almost three years ago, after reading and loving Lettice Cooper's National Provincial. I never got around to reading it until last week when I was going on a short jaunt to Dubrovnik -- I do try to bring books on holiday that have a local connection. I couldn't find anything on my shelves set in the Balkans or on the Adriatic, so I decided a book set in Italy would have to do.

Set in the 1930s through the 1940s, Fenny is the story of an Ellen Fenwick, an English schoolteacher who gives up her job at a girls' school to take a temporary post as governess to a little English girl living in Tuscany. The story begins in 1933 when Fenny arrives in Italy to begin her new post at the Villa Meridiana, a house loaned to the Mr. and Mrs. Rivers. The husband travels back and forth from his work in London, so most of the time it's just Ellen, nicknamed Fenny, with her charge Juliet and her mother Madeleine, the daughter of a famous stage actress. They tend to socialize with the Warners, another ex-pat family, and Fenny finds herself much thrown together with Daniel, tutor to Warner's the oldest child. It seems like an obvious romantic interlude but things take a very unexpected turn. The rest of the book details Fenny's life until the late 1940s, and how it is entwined with members of the two families, before and after the war.

Though it's primarily a domestic story, Fenny does include the rise of fascism and WWII, and how expats were affected. The book is divided into four parts, and the second part jumps forward about three years, just before the war; then to 1945, as the war is ending; and finally 1949. 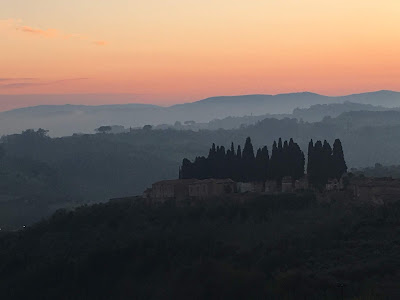 The Tuscan countryside, near Siena.


I really enjoyed this book but I think I would have liked it even better without the time jumps -- I really wanted to know more about Fenny's story, especially during the war. Also, I feel like some of the side characters' outcomes were only mentioned as afterthoughts. I know there seem to be a lot of books where characters miraculously show up years later, and it's completely realistic that people disappear from your life entirely, but still, it felt a little unresolved. Of course it would have made for a much longer book but I'm quite sure I would have enjoyed that! National Provincial is about 600 pages but I was thoroughly engrossed.

I do want to read more of Lettice Cooper's work, but I don't know a thing about any of her other novels except National Provincial and The New House, both Persephone reprints I loved. Most of her novels seem to have plenty of used copies available online, except for one called Desirable Residence, copies of which start at around $35 US, and have price listings upwards of $200! However, there seem to be library copies available through WorldCat, so I'll have to wait and check it out via ILL after I return to the U.S.

I'm counting this as my book set in Italy for the Reading Europe Challenge.
Posted by Karen K. at 4:00 AM