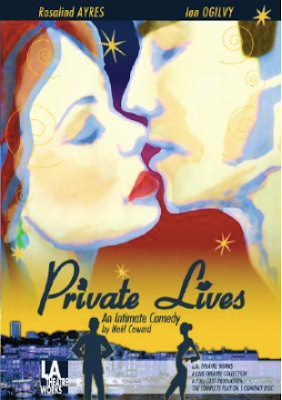 I've been really trying to read more plays the last couple of years, for several reasons. First, because I've really gotten into theater; because I realized it's a whole genre of writing that I've largely ignored; and finally, because they're really quick reads (every year I set a goal of 100 books to read and I'll admit I have read plays in December so I can make my quota -- silly, I know, but I can't help myself).

I'm also always looking for things to listen to while walking, and while browsing the library's Overdrive catalog, I saw that there were some Noel Coward plays with full-cast recordings. In December I listened to a recording of Coward's Blithe Spirit, which I loved but never got around to reviewing. I also found Private Lives, a short play which is one of his most popular, so I was happy to find it. I listened to the entire thing in the course of a day, over two walks, as it's just over an hour long.

Basically, it's the story of two British couples: Elyot and Sibyl, and Victor and Amanda. We first meet Ellyot and Sibyl, a couple on their honeymoon in a resort in Deauville, on the coast of France. They've just arrived and Sibyl somehow brings up the subject of Elyot's previous marriage to Amanda. Little do they know that Amanda has also just remarried, to Victor. . . and they're also honeymooning. . . in Deauville. In the same hotel. In fact, Amanda and Victor are in the next suite, and they share a balcony. To their mutual horror, Ellyot and Amanda encounter one another, and, aghast, try to convince their respective new spouses to leave the hotel and honeymoon in Paris instead -- without admitting that their exes are in the next room. Basically, it's a bedroom farce and naturally all goes wrong, setting up comedic events in which the couples have to decide whether or not they're better off married -- and to whom. 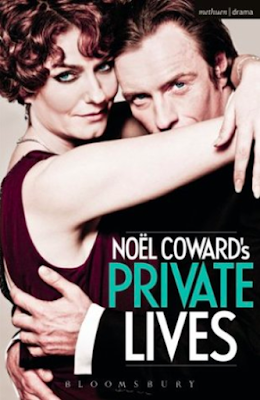 This sounds like the setup for a fun and rollicking farce, and in parts, it is. However, I wasn't prepared for the fact that there's a history of domestic violence in the relationship between Amanda and Elyot -- and it occurs again, and it seems like it's played for laughs. (There's also a lot of bickering and shouting that also would have made me really uncomfortable, even without the domestic violence). The play was originally written in 1930, and hopefully, domestic violence is taken much more seriously now. I don't know if Private Lives is still performed regularly and how it's addressed. I know there's a film version from 1931, and there's a recorded version from the West End, but I haven't watched either of them. I may have to try them and reserve judgment. Parts of the play are very witty and some of the characters get in some real zingers when they're arguing, but mostly it made me really uncomfortable. But I did love Blithe Spirit so I'm not going to give up on Noel Coward just yet.

I'm counting this as my Classic Play for the Back to the Classics Challenge.

Labels: Back to the Classics 2021, between the wars, plays