All Creatures Great and Small by James Herriot 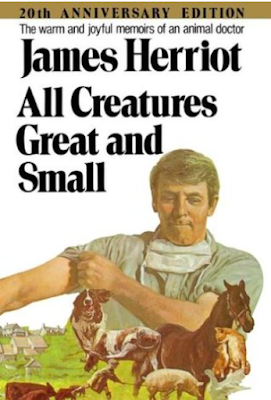 I've been a big fan of British/PBS television series for years, but somehow, I missed watching All Creatures Great and Small. I guess I was the wrong demographic when the original series came out in the 1980s -- it was something my grandparents watched, and definitely Not Cool Enough. I've shelved the series of memoirs at the library often enough to know them by sight, and I'm quite sure I'd have never got round to reading or watching it until the new series reboot started a couple of weeks ago.
But I'm always looking for good audio books for my daily walks and I was able to download the first in the series a couple of weeks ago. If you're not familiar, it's the memoirs of a young country veterinarian in Yorkshire as he navigates his way in his first job as an assistant vet in a rural practice in the 1930s. Young James Herriot (the pseudonym of James Alfred Wight) is newly qualified and desperate for a job. He had always planned on working with small animals, but James jumps at the chance to work for the dashing yet slightly eccentric Sigfreid Farnon, who has recently purchased a practice in Yorkshire. 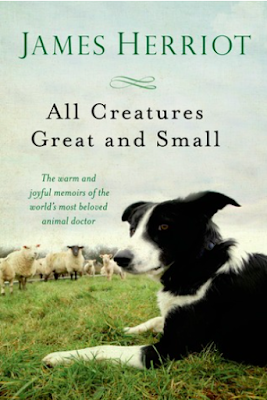 The book is a series of short chapters, each detailing amusing, poignant, and sometimes sad stories of his work in his first year as a veterinarian, treating cows, horses, various livestock, and sometimes pets. The reader is introduced to some colorful local Yorkshire characters, farmers and gentry, including Mrs. Pumphrey and her spoiled but loveable Pekingese, Tricki-Woo; and also some possible love interests, including the beautiful Helen Alderson.
The audiobook is beautifully narrated by Christopher Timothy, and I didn't realize until I was nearly finished that he played James Herriot in the original series! He does a great job with the accents different voices, and I liked it so much I listened to the entire book on audio instead of rushing through it and reading the print volume which I got from the library as a backup. I often have a print or e-book copy of an audio and alternate. Often, I get really caught up in a story and wind up reading the print copy instead of taking the time to finish the audio. But I liked the audio so much I forced myself to be patient and listen. I was a little surprised that he didn't use a Scottish accent for Herriot but maybe that was too much for an entire audio? In the new series Herriot is definitely using a Scottish accent, but it makes sense as the actor is in fact from the Highlands. 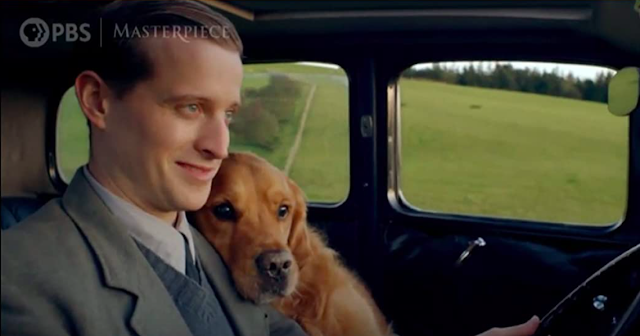 Nicholas Ralph as James Herriot, with an adoring co-star.
And about the new series. . . well, it's beautifully filmed and I love seeing all the animals, but I already have some quibbles since I'd read most of the book before I started watching. We've only had three episodes air here in the U.S. but I'm already annoyed with some of the changes they've made, both with the plot and the characters. I'm sure I'll watch all eight episodes, but I'm already hoping that the original series didn't make as many changes. I did love the book and am already on the library waitlist for the next in the series. It's perfect reading for difficult times and I suspect I may finish all the books in the next few months.
Posted by Karen K. at 1:25 PM