The Short Reign of Pippin IV by John Steinbeck: A Little Mid-Century Satire 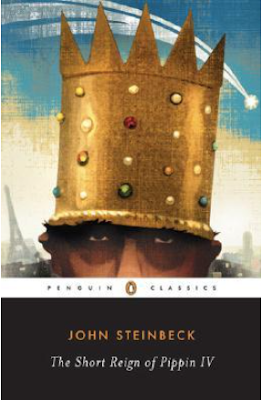 I was stuck in two very long books last week (that I wasn't particularly enjoying) and in desperation, I took one of the shortest books off of my owned-and-unread shelves: The Short Reign of Pippin IV by John Steinbeck, a vintage hardcover of only 164 pages, most likely purchased at one of the library sales. I've loved mostly everything by Steinbeck so far and it was very short, so I thought this might be just the thing to get me out of my reading funk.
Published in 1957, Pippin is Steinbeck's only work of political satire. Pippin Heristal, aged 54, is living a comfortable if somewhat dull existence in Paris with his wife and daughter. He has a lease on an apartment (oddly enough, in the mews of the French President), and he doesn't really work but has a small but adequate income from a vineyard, spending most of his time as a well-respected though amateur astronomer.
During a week-long meteor shower that keeps him up all night and sleeping all day, Pippin is blissfully unaware of a government crisis. The multiple parties are in an uproar and one desperate politician suggests a return to the monarchy. After much in-fighting, it is decided that the living descendant of Charlemagne should be the rightful King of France -- the eponymous Pippin. 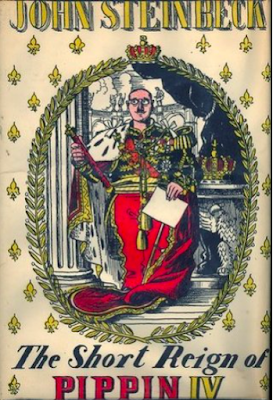 Politicians have decided that since it's worked for the UK for so many years, it would be good for tourism and distract the public so they can get on with the business of governing. Much to his chagrin, Pippin is forced to move in to Versailles and go through with a coronation. Meanwhile, his bohemian daughter Clotilde has taken up with a Tod, young American tourist, heir to a vast chicken-farming fortune.

Pippin hates the role instantly and is desperate to get out of the drafty palace and its hangers-on, and back to his beloved telescope. He finds solace and advice from some colorful side characters -- his uncle Charles, an antique dealer of dubious morals; and Sister Hyacinthe, his wife's old schoolmate, a former chorus girl who took the veil after retirement. He also finds comfort and insight from young Tod, who makes a mean Martini and is terribly insightful for one so young.

This was a pleasant diversion, though there was more politics that I really wanted right now. I enjoyed the characters and there were some amusing bits, but the plot's not terribly strong. I finished it only a week ago and I've already forgotten the ending. I'm not terribly surprised that this one isn't as popular as the other Steinbeck novellas, it seems sort of dated.

I'm counting this as my Classic Humor or Satire for the Back to the Classics Challenge and as my French selection for the European Reading Challenge.

Labels: Back to the Classics 2021, classics, France, novella, royalty, Steinbeck