I love a long, epic story, and if it's historical fiction and involves travel, better still. I was so looking forward to Green Dolphin Street because I was absolutely sure it fit the bill, but strangely, I was somewhat disappointed. Published in 1944, it was first titled Green Dolphin Country by renamed in the U.S. Essentially, it's a fifty-year love triangle between a man and two sisters who are his childhood friends.
Set in the mid-Victorian period, the story begins in one of the Channel Islands (it's never referred to as anything but The Island, but clearly it's one of them). Young William Ozanne, about thirteen, has just arrived from England with his father, a widowed doctor. He soon meets Marianne Le Patourel, who is a bit older at sixteen, and her younger sister, Marguerite, who is only eleven, and the three become fast friends. Marianne pushes her wealthy father to take an interest in William, furthering his education and career. Both girls are smitten with the handsome and affable William, but Marianne is convinced that she has found True Love and that Marguerite has a mere schoolgirl crush. As Marguerite grows more beautiful, Marianne realizes William may be falling for her sister, and she fights hard to keep him close.
Eventually William joins the Navy under the Le Tournel patronage, and ends up in New Zealand. After a long absence, he writes a long impassioned letter to Mr. Le Tournel asking for the hand of his daughter in marriage. However, he's extremely drunk at the time, and accidentally writes the wrong daughter's name in the letter, and is shocked months later when a different woman arrives. The rest of the book is the repercussions of William's split-second decision. Will he marry the wrong sister, and how will it affect all three lives?
This book started out really well -- I loved the descriptions of their life on the Island and the characters. However, in order to fit in the lifetimes of three people, Goudge writes the book in sections with big time jumps in between, usually ten years or so, and then kind of backtracks and sums up what happens during the gaps, and this started to bother me. It seemed like there was a lot more telling that showing -- there was so much condensed that could have been fleshed out. After one big time jump I put the book down for several weeks and didn't have much incentive to pick it up again, until I started to feel guilty about leaving it unfinished. It's a really ambitious story and maybe it would have been better as a series of books, with more details.
Also, I think there could have been more character development -- I really didn't always understand what motivated the characters, and what explained their actions. I started to really dislike Marianne, who just seemed bossy and manipulative. I like strong female characters but it almost seemed like this was meant to be a bad thing. The book was published in 1944, and I don't know if Elizabeth Goudge was anti-feminist but that's the impression I started to get.
I would also be remiss if I didn't mention the racism in the book. Mostly set in New Zealand, there are some positive portrayals of native culture, but it's mostly negative stuff about the Maoris, and there's a white savior character that made me roll my eyes a bit. Overall it was the pervasively colonialist -- my edition also has a disclaimer in the beginning which is sort of a red flag. I was definitely Team Maori while reading the book.
Overall I mostly enjoyed it, because of the descriptions of life in the Channel Islands and New Zealand, and there's a lot of sailing, which always fascinated me. Some of the side characters were delightful, especially Captain O'Hara, captain of a clipper ship named -- you'll never guess -- the Green Dolphin, who makes recurring appearances. I don't know if I liked it well enough to read any other books by Elizabeth Goudge.
And I've recently discovered it was adapted into a movie in 1948, starring Lana Turner and Donna Reed. (Donna Reed is playing Marguerite, though they've obviously glammed up Marianne if she's supposed to be Lana Turner). It won an Academy Award for special effects and there's a copy at my local library, so I'll have to take a look and see how well they adapted it. 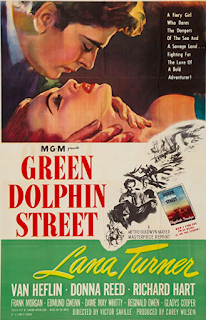 I'm counting this as my Classic by a New-to-Me-Author for the Back to the Classics Challenge; also counts for the Chunkster Challenge.
Posted by Karen K. at 9:37 AM