The Real Charlotte by Edith Somerville and Martin Ross 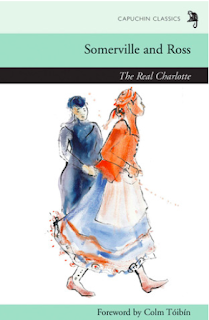 It's been more than ten years since I became a hard-core fan of the Victorian novel, and since then I've read most of the male authors which are the typical literary canon. Now I've moved on to the more obscure works, many of which are written by women. The Real Charlotte has not one but two Victorian women as authors: Edith Somerville and Florence Violet Martin (who wrote under the male pseudonym of Martin Ross).
Published in 1894, The Real Charlotte is not so much the story of Charlotte Mullen, a fortyish Irish spinster, as it is about her young cousin, Francie Fitzgerald. Aged 19, Francie is a beautiful orphan who has come to live with her cousin after the death of an elderly relative, whose dying wish was that Charlotte take care of her. Francie had been living with Dublin with relatives who have recently fallen on hard times, so she's been sent to live with Charlotte in the country, at Tally Ho Lodge. 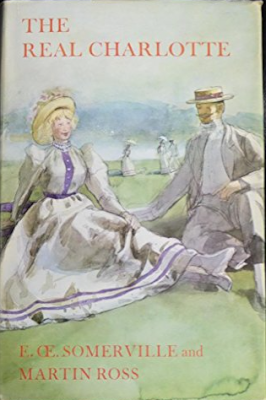 Beautiful and flirtations, Francie attracts the attention of several men: Christopher Dysart, oldest son of the local gentry; Gerald Hawkins, a British army officer stationed in town; and also Roderick Lambert, agent to the Dysart estate, and an old family friend. Lambert claims to have only a friendly interest in Francie, since he's 15 years older and married to a wealthy widow, but it becomes obvious that he's jealous of Francie's friendships with other men.
Francie raises eyebrows around town by spending too much time with the dashing and equally flirtatious Hawkins, and the pair are often unchaperoned for questionable amounts of time. Charlotte is angling to get Francie engaged to Christopher Dysart, who is kind but rather too interested in books and photography for Francie's taste. But the social-climbing and ambitious Charlotte has ulterior motives for the match, and will use her friendship with Lambert to get what she wants. Meanwhile, there are garden parties, picnics, and some sailing accidents, plus some pretty obvious foreshadowing, until everything comes to a dramatic and rather abrupt conclusion. I tried reading this a year ago and really couldn't get into it, but I thought I'd take a look and see if it would be a good pick for my March reading because of the Irish setting. The first couple of chapters are a bit disjointed but once Francie arrived at Tally Ho Lodge the story really took off and I could hardly stop reading it, finishing it in only three days. (Which isn't really that impressive, it's less than 400 pages, and a lot of short chapters). I was really curious to see how this was going to end up and why the book was named after Charlotte, since most of the time it seems like Francie is the central character.
Oddly enough, several characters and plot points reminded me of Jane Austen -- I don't know if I've been reading too much Jane, or if these have become rather stock characters. Hawkins definitely reminded me of a both Wickham and Willoughby, and Lambert seemed an awful lot like Knightley from Emma, though a lot less benevolent, not to mention married. There's a even a plot point that seems straight out of Mansfield Park.
My other quibble was about how the Irish are depicted. Naturally the gentry are English, and look down on anyone local, or with an Irish accent, and many of the characters speak in dialect, particularly servants and the working class. I don't know much about the authors other than they were cousins and wrote about 14 books together before Martin's death in 1915. Somerville continued to write under their joint names. The Real Charlotte is considered their masterpiece, but today they may be better known for the Irish R. M. series of books adapted into the 1980s TV series. The Real Charlotte was also adapted for TV in 1990, but no copies in the library means I'll have to keep a lookout for a copy online. 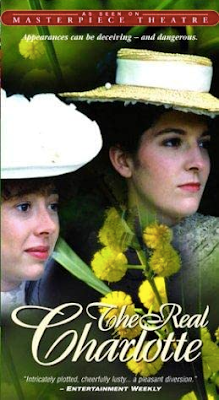 I'm counting this as my Classic by a Woman Author for the Back to the Classics Challenge; and as my Irish selection for the European Reading Challenge.
Posted by Karen K. at 11:35 AM

Labels: Back to the Classics, Ireland, Victorian