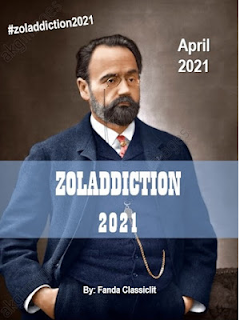 It's April and that means Fanda's annual Zoladdiction, a celebration of the life and works of Emile Zola (1840-1902). After putting it off for several years, this time I decided to tackle La Debacle, the pentultimate work in his Rougon-Macquart cycle. A story of fictional people in the Franco-Prussian war of 1870, it's considered one of the best war novels of all time, and was Zola's most popular novel when it was published in 1892.

I've been really daunted by this one because it's by far his longest, more than 500 pages, and honestly, I am not a fan of war novels. I'm very bad at following extended action scenes in novels, and I'm much more interested in the social aspects of wartime than of military strategy and maneuvers. I'm normally good at picturing descriptions of scenery and landscapes in my head as I read, but if there's any kind of action, my mind tends to wander. So I was not looking forward to 514 pages of battle scenes.

However, I persevered. The story begins in August of 1870. After the Second Empire declared war on Prussia, the French were pushed back over the borders of western France, in the Alsace-Lorraine region. The main characters of the story are Jean Macquart, who has rejoined the military as a corporal after the disastrous events of La Terre (The Earth); and the soldiers in his regiment, mostly Maurice, who is of a higher class, but is a less experienced soldier. At first Maurice is condescending to Jean, but eventually they become close friends after Jean looks out for him during the course of the war.
As the story begins, the French had planned to march on Berlin and assert dominance over the Germans, but are quickly pushed back by the superior and more organized Prussian army. (The French were so confident of victory they only brought maps of Germany, and none of western France, leading to mass confusion). Much of the first quarter of the book consists of various regiments basically marching around France, not knowing exactly what's going on, and trying to find food and shelter from terrified and suspicious peasants and villagers. It's pretty much a disaster.

We finally get to the actual battles in the second quarter of the book, with a lot of battle descriptions in the fields outside the towns, and the siege of the town of Bazeilles, home of Henriette Weiss, the twin sister of Maurice. After Maurice and Jean take a night's rest inside the Weiss home, the story begins to follow Henriette and her husband, and his employer Delaherche, the owner of a dye factory where the military sets up a temporary hospital. There's also another side character, another soldier in their company called Honore, whose heart was broken when his father wouldn't let him marry the girl he loved, Silvine. Silvine was devastated and has since had child by a Prussian jerk named Goliath, who then refused to marry her. However, Honore still loves her and ironically, Silvine and the child are now living at his father's farm as she has nowhere else to go. 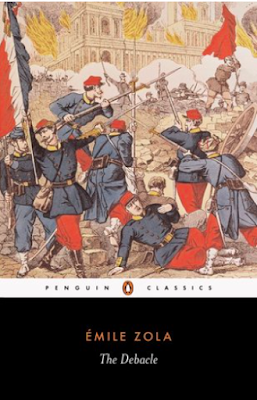 For me the book really picked up when it was more character-driven. Zola is really good at creating realistic characters, and his depiction of how the war affected the civilian population was really good. Of course I'm always more interested in the social aspect than the military and political side. My mind did tend to wander when Zola was describing all the political events and military maneuvers as the war goes from bad to worse for the French, and the Prussians take over.
The fighting doesn't stop, however, and Weiss ends up going back to Paris. Unbeknownst to all of them is the upcoming siege of Paris and the Paris commune! Things are going to get worse! The short version is that after a months-long siege of Paris by the Prussians, overthrow their own government and all hell breaks loose inside the city, culminating in a bloody week when more than 20,000 people died and much of the city burned to the ground. I've been to Paris several times and I am aghast that I had no idea that this happened. 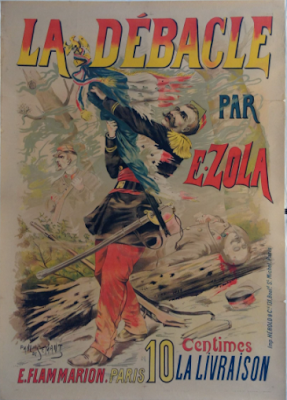 Despite all the politics and warfare, I ended up really liking this book, though it's a lot to take. There is a LOT of violence and pretty detailed descriptions of deaths on the battlefront, executions, wartime hospitals (including amputations), disposing of bodies, and just general unpleasant things that happen in wartime. Might not be the best choice if you like to read and eat at the same time.

The hardest parts for me to read were definitely the military actions and the history of the politics that were going on, culminating in the Paris commune. I was a history major but I haven't read that much academic history for a long time, and Zola crams in a lot of facts, names, dates, and places, and it was tough to keep everything straight. I absolutely understand why he had to include all of it, but it wasn't my favorite part of the book.  I read the Oxford World's Classics edition, pictured above, which includes a lot of resources in the endnotes, timelines, and maps, which were great. There's also a list of the characters, the first one I've seen in a Zola novel.

Until I started reading this, I also didn't realize that much of the action takes place a fairly short distance from where I spent three years in Germany! There's a lot of mentions of cities and towns that I actually visited, like Strasbourg and Metz, which are a fairly easy drive from our house in the Rhineland. I'm quite sorry now that I didn't read this while I was living there -- I certainly would have paid closer attention while I was on day trips and maybe even tried to trace the route of the armies. (It makes sense why the U. S. military built an enormous base nearby for its strategic location.) And I visited Paris multiple times when we lived there, but not once did I visit Place Vendome and many of the other important sites mentioned. I guess I'll just have to go back someday!

I'm counting this as my Classic in Translation for the Back to the Classics Challenge. Thanks again to Fanda for hosting Zoladdiction 2021 and inspiring me to finally read this book!