Death of an Airman by Christopher St. John Sprigg 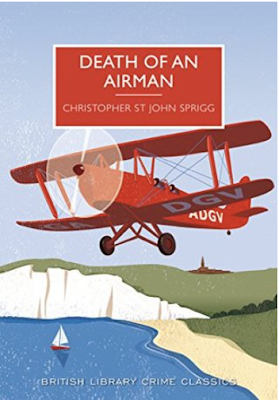 My first book of the year! I'm so behind, can't believe it's taken me two whole weeks to finish a book. (At this rate, I'll never finish my annual reading goal of 100 books). I thought it would be fun to start the year with a mystery. I bought a stack of British Library Crime Classics on a trip to London a few years ago, and this one was a the the checkout -- I think if you bought three, you got one free, so I threw it on the pile. I cannot resist the covers, I love their vintage travel poster style. (I'm sure there's a name for it but I have no idea. If anyone is aware, please let me know).
Originally published in 1934, the story is pretty self-explanatory -- at a British airfield, a small private plane crashes, instantly killing the pilot. Or does it? One of the witnesses, an aviation student who also happens to be an Australian Bishop, realizes after the burial that there had been something odd: while waiting for the local doctor who was delayed, the body hadn't achieved rigor mortis, suggesting that the pilot hadn't actually died at impact, but much later. Further investigation reveals a gunshot wound -- clearly, a case of foul play. The investigation is taken over by a local policeman then heads up the chain to Scotland Yard as he starts digging deeper and reveals an international conspiracy.
It sounded like an intriguing read, though I know nothing about aviation, nor do I have any desire to ever go up in a tiny plane. Sometimes readers don't need to have specific knowledge about a themed mystery -- until I started reading Dick Francis mysteries, I knew nothing about horse racing, but I never had any trouble following the stories. In this case, there was a lot of technical jargon which mostly went over my head. Plus, I feel like the story kind of meandered all over the place. I realize that it's in the nature of mysteries --  investigations always have leads that don't pan out and detectives have to keep exploring -- but it felt like it wasn't as tightly focused as some of my favorite classic mystery writers like Agatha Christie. I read all her books years ago and maybe she's just spoiled me for any other writer? Plus, this book was pretty sexist:
"An intelligent girl," said Creighton. "I don't know why one is surprised when a good-looking woman has brains." Mmmkay. I get that it was written about 90 years ago but yikes.
It was a slow read for me because I just wasn't that interested in any of the characters. It's less than 300 pages and it still took me about 10 days to read this book. It did pick up in the last fifty pages but not one of my favorite classic mysteries. I'm finding the British Library Crime Classics a bit disappointing. Maybe there's a reason most of these were out of print? I've think I've read four or five so far and none of them have been very exciting. I have a couple left unread on my TBR shelves and I hope they're better, otherwise I'm going to give up on this series.
I'm counting this as my Mystery/Dective/Crime Classic for the Back to the Classics Challenge. One down, eleven to go!
Posted by Karen K. at 2:16 PM

Labels: Back to the Classics 2022, between the wars, mystery