The Chequer Board by Nevil Shute 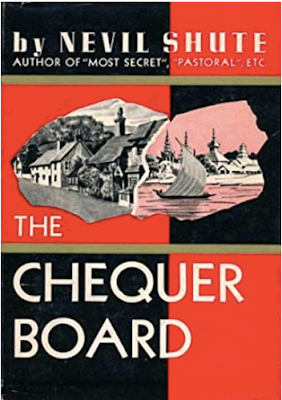 I am very behind with my reading already this year -- normally by this time I've read at least four or five books, if not more. I really needed a fast read to get me inspired, so I turned to one of my most reliable authors, Nevil Shute. I think this is the eighth book by Shute that I've read, and I've mostly enjoyed all of them. They might not be considered great literature, but he is a great storyteller, and normally I can hardly put his books down.

Published in 1947, The Chequer Board is the interweaving story of four WWII soldiers who are linked together after surviving a plane crash. They're all assigned to the same hospital ward and the most seriously injured, John Turner, suffers a very serious head wound, and his eyes are bandaged. While convalescing, the other three, previously unknown to Turner or each other, all read or talk to him, to help him recover. Several years after the war, Turner begins to have side effects from the head wound, and upon consultation, learns that shell fragments have been left behind in his brain, which are inoperable, and he has about a year left to live.

Two of the three in the ward were also crash survivors, and the third was a Black American GI. One of the crash survivors was one of the pilots, who was very racist and snobbish to the Black American. The other three -- Turner, the American, Dave Lesaurier, and a third crash survivor -- are under guard together because they're awaiting court-martial, accused of various crimes. Turner has always wondered about the other three men in the ward with him, and decides to use the time left to try and track them down and see what happened to them.

So, the story goes back in forth in time between the wartime experiences of the three men, and Turner's search for the them, which takes him all around England as far as Penzance, and all the way to Burma. (Another book about Cornwall! The universe is obviously telling me to go there).

There's a lot about race relations and prejudices in this book, both with the racist pilot, Morgan -- who ends up living in Burma, to the chagrin of his mother (the reader can see where he got his prejudices) and also with the Black GI, Dave Lesurier. It was very interesting to me to see how Shute was trying to explore racism and race relations in the UK at the time, and I honestly can't imagine an American writer of that era attempting the same. Those two stories were my favorites in the book, though there are quite a few racial slurs repeated, including the N word, which is so infuriating. The story is trying really hard to make the point that white people need to get over it and look past color, but Shute kept throwing the word in, which was pretty frustrating. There's also some sexism which made me roll my eyes.

Overall though, the message about getting along is pretty strong, and there are some great characters and development. In particular I liked learning how the residents of a small town in Cornwall supported a group of Black GIs. I know racism is still a big issue in the UK but it was nice to see someone in the 1940s pointing out how the Black GIs were treated better in England than they were at home.

I also really enjoyed reading about Burma, which I briefly visited years ago on a trip to Thailand. That section of the book was very reminiscent of A Town Called Alice, one of Shute's best-known books, though that one is set in Malaysia. There are at least seven or eight more books by Shute I still haven't read, and I look forward to reading them all.

This is my first book for the TBR Pile Challenge.