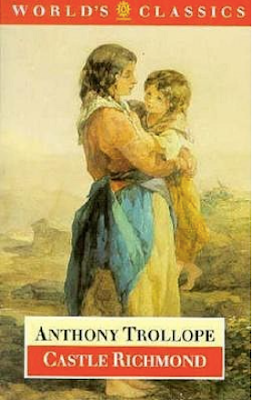 It is impossible that these volumes should be graced by any hero, for the story does not admit of one. But if there were to be a hero, Herbert Fitzgerald would be the man.

A Victorian novel by Anthony Trollope, set in Ireland? This book could not be any more in my wheelhouse. For the Back to the Classics Challenge I needed a book from the 19th Century and I still had five unread Trollopes on my TBR shelve. Two of them were set in Ireland so that seemed like an obvious choice for March.

Trollope spent nearly twenty years in Ireland working for the post office, and began his writing career there. His first two novels are set in Ireland, and were written during the Great Famine. Castle Richmond, his third novel set in Ireland, was published in 1860, but is set several years earlier. It does use the Great Famine as a plot point, but much less so than I was expecting.

Basically, it's the story of a love triangle between two cousins of the landed gentry, Owen and Herbert Fitzgerald, and the girl they both love, Clara Desmond, the beautiful but poor daughter of Countess Desmond, a young widow whose marriage was less than happy. There's also a complicated plot about the inheritance of Castle Richmond, the seat of the wealthy Fitzgerald family. But I'm getting ahead of myself.

Owen Fitzgerald is the young squire of Hap House in County Cork -- technically gentry, but the poorer branch of the Fitzgerald family, and untitled. He is handsome and dashing, and befriends the young Earl of Desmond, acting as a sort of older brother. They go hunting and fishing and whatnot, and Owen also notices the young Earl's older sister, Clara, who is about sixteen. Eventually he declares his love for her, and she returns his feelings. However, her young widowed mother, who is not yet forty, quashes all her hopes -- Owen is too poor and lacks a title, so she refuses to acknowledge any engagement and forbids Clara to see or write to Owen. (The reader is also aware that the young Countess is also crushing on Owen and secretly wanted him for herself).

About a year Clara is befriended by two of Owen's distant cousins, Mary and Emmeline Fitzgerald, from the wealthier portion of the Fitzgeralds -- the family living at Castle Richmond. She spends time with them and is much thrown together with their brother Herbert, the heir and future Baronet. He's younger and more bookish than his dashing cousin Owen, who considers him a prig. It would seem that Clara and Herbert would be a perfect match -- she's beautiful and he's rich, and they're both gentry. But that would make for a very short novel, so there must be complications -- which arrive with some nasty characters from London, Mr. Matthew Mollett and his son Abraham, who have come to County Cork to stir up trouble for the wealthy Fitzgeralds.

Before marrying Lord Fitzgerald of Castle Richmond, his beautiful wife Lady Fitzgerald had made an unfortunate marriage with a ne'er-do-well named Talbot who deserted her and her child and ran off to Paris, where he was supposedly killed in a fight over a gambling debt. Eventually, she met and married Lord Fitzgerald. Now the Molletts have arrived with the intent of blackmailing the Fitzgeralds, claiming that Lady Fitzgerald's husband is still alive and that her children are illegitimate. . . making Owen Fitzgerald the rightful heir of Castle Richmond and the title.

I liked this novel, though the love triangle and the blackmail plot lines are the strongest. But these characters are basically wealthy Protestant landowners. There's actually not that much in the story about Ireland and the famine -- that's mostly a peripheral plot point only in how it affects the main characters. As landlords, the Fitzgeralds are trying to help the starving population, and there's some infighting between the Catholic and Protestant clergy about how to best help everyone which is pretty infuriating, but that's not a large part of the story.

Overall I did enjoy the novel and sped through the 500 pages in just about a week. I'm getting down to the last few unread books by Anthony Trollope. I can proudly say that I've now finished 38 (!) of his 47 novels. When I've finished them all I'm sure I'll be sad but I guess I'll just have to start reading them all over again!

This is my 19th Century Classic for the Back to the Classics Challenge, and my Irish read for the European Reading Challenge.