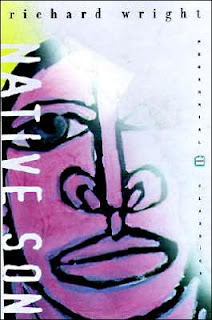 That is my first reaction to this book. I've tried my best to avoid spoilers, but if nothing else, I will say that this is one of the most shocking, horrifying books I've read. I wanted to stop reading it, but I couldn't. I had to find out what was going to happen to Bigger Thomas, who must be one of the most famous train wrecks in literary history, and deservedly so.

A short setup: Bigger Thomas, a young African-American man, is scraping out a miserable existence as a criminal in 1930s Chicago. He lives in a rat-infested one-room tenement with his mother, brother, and sister, and has no job.  On the first day of our novel he is trying to decide whether he should commit an armed robbery, not his first. His mother is pushing him to accept a job to get the family off welfare -- a job as a chauffeur for a wealthy white family, who ironically own the overpriced tenement in which they live. Bigger decides not to commit the robbery and go for the job, so for a few pages it's almost hopeful that he'll break the cycle and lead a better life. Sadly, before he finishes his first day on the new job, Bigger commits a horrible (though possibly accidental) crime that leads to a downward spiral of deceit and crime. Native Son has no chapters, but it's divided into three books: Fear, Flight, and Fate. The first book is largely centered around the development of Bigger's character and his crime. The second book concerns his attempts to escape; and the third is his trial and judgement.

I was really surprised that Bigger was such a horrible character. I won't sugar-coat it, Bigger is really unpleasant. For a protagonist, I could not find one redeeming quality in him.  He is mean, devious, and completely self-centered. Apparently author Richard Wright didn't want to create someone who people could find sympathetic and cry over, then forget about. Believe me, you will not forget about Bigger. But Wright turns the tables and uses Bigger to make some really important and uncomfortable points about racism and race relations.

This book has been on my to-read list since 2005, when I decided to read the entire Modern Library list of the top 100 novels.  (This brings me to 45 completed on that list, 55 on the Radcliffe Top 100).  There's a lot of debate about what makes something a "best" novel, but I have finally decided that these two lists aren't necessarily the best novels of the 20th century, but really the most important, the most groundbreaking, because most of them have achieved something noteworthy that hadn't been done before. Though I can't really say I liked this novel, I can respect and appreciate its importance in the literary canon. In a way I'm sorry I took so long to read it, but I'm glad that I waited since I was able to discuss it with real people in our February book group meeting. My good friend Amanda at The Zen Leaf is also a member, and you can read her thoughts about Native Son here.

This book is not for everyone -- not for the squeamish or easily offended. It's one of those riveting stories that are just horrible, but the writing is so good I wanted to finish it. I'll admit, the book is very intense and several times I had to put the book down and step away. I did read this book in just a few days, so despite its length (430 pages of text in my paperback edition, plus lots of extra stuff) it's a really fast read.

I can't say it's one of the best books I've ever read -- the third book in particular has some very long speeches in which Wright gets up on his literary soapbox, and I'll admit I skimmed parts of this -- but certainly, it is a book that I will never forget.  I have no desire to read it again, but I'm glad I read it.
Posted by Karen K. at 11:55 AM