A couple of winners, in every sense of the word. A Year Down Yonder, the 2001 Newbery Medal winner, is the sequel to the 1999 Newbery Honor book, A Long Way from Chicago.  Each book is distinct enough to stand on its own, but together, they're even better.  Both of them made laugh out loud, and the second made me a little misty-eyed in parts.

I was mildly irked when I realized A Year Down Yonder is the second in a series, since I truly dislike starting a series in the middle -- sometimes there are spoilers, and I'm always wondering if I'm missing something important.  But I saw that the first book is pretty short, and it came highly recommended from a library employee.  It's worth every minute, and it grabs you from the first chapter.

The setup:  A Long Way from Chicago is a first-person narrative from nine-year-old Joey Dowdel and his little sister, Mary Alice, are sent to visit their eccentric grandmother in a little town in downstate Illinois. The book is subtitled "a novel in stories," and each chapter is a funny story from a different summer in his childhood, beginning in 1929.  Joey and Mary Alice are from Chicago, which is rife with the antics of John Dillinger, so they figure a visit to Grandma will be pretty dull.  Not so -- there's always something entertaining going on.  Grandma Dowdel is cantankerous character, a bit of a trickster, so every summer is a bit of an education for Joey and Mary Alice, like the second summer, when Grandma gets even with some pranksters who think it's funny to explode her mailbox and knock down Mrs. Wilcox's privy.  There's a lot of privy humor in these books, and shotguns, and even some poaching.  Oh, and lest I forget, a little moonshine, a phantom brakeman, and a mouse in a bottle of milk.  Sometimes Grandma's actions are legally suspect, but her motives are ultimately unselfish.

Grandma Dowdel is one of the funniest characters in children's literature.  She's tough, but with a great heart, and I didn't find her quirkiness overly contrived or stereotyped, like in some other children's books I've read lately.  I think sometimes authors try too hard with the quirky factor, and it can just seem fake and annoying.  All of the characters in these books seem believable to me.  This book was so good I couldn't figure out why in the heck it didn't win the Newbery that year.  Well, that was 2001, and the winner was Holes by Louis Sacher, one of the best children's books ever, in my opinion. 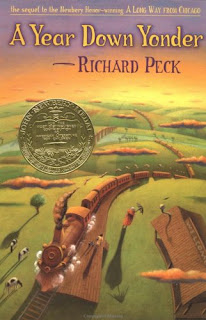 The second book, A Year Down Yonder, is a year in the life of Mary Alice.  She's about 15 and is sent to live with her grandmother during the Depression. There are more stories of Grandma Dowdel getting the best of pranksters, snobby DAR ladies, and nasty high school girls.  Again, it's really funny, but some of the content might actually be appropriate for older children or even YAs -- there are some hints about illegitimate children and a nude artist's model, so you might want to save this one for the 10 and up set. But I still really enjoyed it, and I've been reading chapters (slightly edited) to my third grader.

Here's a quote from A Year Down Yonder that pretty much sums up Grandma's character:

"Mrs. Dowdel," said Mrs. Sheets, "I'm here to tell you that you're twice as bald-faced and brazen, and yes, I have to say shameless as the rest of us girls put together.  In the presence of these witnesses I'm on record for saying you outdo the most two-faced, two fisted shortchanger, flimflam artist, and full-time extortionist anybody ever saw working this part of the country. And all I have to say is, God bless you for your hard work.

"Mrs. Dowdel. . . . you're not everybody's cup of tea. Well, it's common knowledge, isn't it? But we girls would be proud as Punch to have you join our Auxiliary if you're a veteran's wife.  Did your late husband go to war?"