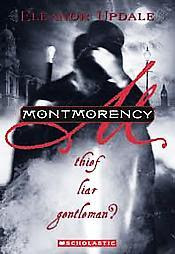 Montmorency is a thief.  A common criminal, doing time in one of Victorian London's notorious prison in 1875. But what makes him a different than many criminals is that he's very smart, and that he is lucky enough to have a benefactor of sorts -- a brilliant doctor who saved his life.  While fleeing the police after a robbery attempt, Montmorency he crashed through a factory skylight and landed on an enormous machine, and would have died from his injuries if an ambitious young doctor hadn't wanted to use him as a test case.  A year after his accident, following multiple painful surgeries, the thief who is known as Montmorency (from the name on the bag of tools he was clutching as he fell) is routinely trotted out for meetings of the Victorian scientific community.   He's prodded and poked like a laboratory animal, while the upper-crusties are treating him like some kind of rare zoo exhibit, Montmorency, a bright young man with an excellent memory, is actually studying them, and storing away all sorts of useful information.  He's not stealing valuables items any more -- just valuable ideas.
After one such exhibition, Montmorency absorbs up a very interesting piece of information:  a map of the newly renovated London sewer system.  Montmorency realizes that this would be the perfect escape route for a thief, and for the rest of his incarceration, he begins planning.  He will use his burglary skills and newfound knowledge to reinvent himself as a gentleman.
I really enjoyed this book.  Of course, I'm currently fascinated by the Victorian period, but this book was both well-written historical novel and an exciting adventure/crime story.  Though I personally would never have the nerve to burglarize, it's fun to imagine -- I do love heist movies and crime capers, so there you go.  I think Upland did a good job imagining any plot holes and figuring out plausible explanations as to how Montmorency is able to pull off a double life as a Victorian gentleman (a trick in itself) and a thief that spends his nights in the slimy sewers of London without getting caught.  He does encounter all kinds of setbacks and dangers.
I do wish that Updale had given more details about the actual burglaries -- once it's established that he's a thief, she doesn't give many examples of the crimes, just the fact that he's a burglar.  Also, she doesn't flesh out too much of his character -- Montmorency is so busy trying to reinvent himself, yet the reader learns next to nothing about his history, not even his real name. A little more detail would have been great.  Since this is the first in the series of four, I suspect the reader will get more information in the later volumes.
While I do recommend Montmorency, I have to point out that there is extensive discussion, especially in the beginning, about the filth of the London sewer system and everything that's in there -- and fairly explicit descriptions of the sanitation systems of Victorian prisons. If you have a weak stomach, you might want to skim those chapters.  I like to read while I eat, but I would not recommend this book for mealtime eating until you get past about Chapter 13.
It's short, only 233 pages, and a fast read. This volume of the Montmorency series is also available on audiobook, narrated by the wonderful Stephen Fry (aka Wooster from PBS' Jeeves & Wooster).  I've already put Monmorency Book #2 on hold at the library.  Sadly, though there are several copies of the first book in my library system (which has 24 branches) they only own one of each of the remaining books in the series.  It's too bad this book isn't more popular.
This is book #4 for Our Mutual Read challenge.
Posted by Karen K. at 11:07 PM