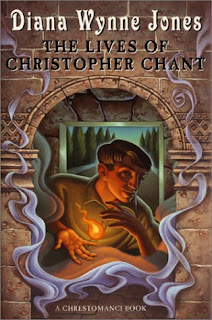 When Jenny announced she was hosting a Diana Wynne Jones week, I was so excited!  I've loved DWJ since I was a child.  Unfortunately, after I discovered one of her earliest books, Dogsbody, it was years before I found another -- my school library didn't get any of her other books, and neither did the public library.  And of course this was before Amazon and library online catalogs.  I didn't even know about ILL back then.  I didn't rediscover her works until I saw one by chance about five years ago, Howl's Moving Castle, another of my favorites.

In the past few weeks, I've been so inspired by all the postings and reviews of her other books I've read six of her books -- two standalone books, plus four from the Chrestomanci series, of which there are now seven books: six novels, plus a book of short stories.  In the interest of time, I'm going to write about two of the Chrestomanci books I've read recently:  The Lives of Christopher Chant and The Magicians of Caprona.

The Chrestomanci books don't need to be read in order like many other series; they're not so much a linear narrative, more like  interrelated novels.  In the Chrestomanci books, our world is one of a number of parallel worlds that have split off from one another and coexist; occasionally, there are people that can travel from one world to another.  In most of these worlds, magic exists and is quite common.  Chrestomanci appears in all of the books and stories, but it isn't a person's name, it's a title -- the Chrestomanci is the most powerful magician of his time, and so he's sort of like the Minister of Magic.   Different books might have a different Chrestomanci, or even two, the current Chrestomanci and a future one.

The first book I read this summer was The Lives of Christopher Chant.  It's set in a parallel version of Edwardian England, and Christopher's parents and uncle all have magical powers.  As a young boy, he also has strong magical powers, but not everyone is aware of them.  He can control his own dreams, and while he's dreaming, he can move from one parallel world to another.  He also has multiple lives.  Christopher also realizes he can carry objects from one world to another.  When his family finally realize how powerful he is, he's sent to train with Chrestomanci.  Things get complicated when people begin to try and use Christopher's powers for personal gain.

Of the four books that I read, this was my favorite.  Christopher is a well-developed character.  He's flawed, but that makes him more endearing.   He wants to be a normal boy, yet he wants to impress his parents and make them love him.  He also wants to please his uncle, who is the first one to recognize his magical talents.  If you've read Charmed Life, the first Chrestomanci book DWJ wrote, this is the back story of the adult Chrestomanci featured in that story.  This was the second in the series that I read, but you could probably read it any order, though I'd recommend it first or second. 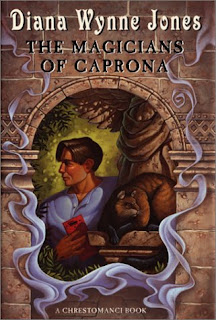 The second book I read was The Magicians of Caprona.  Unlike the other DWJ books, this one is set in Italy.  Again, it's a parallel world, though similar to ours, in which magic is normal.  It's about two magical families in the city-state of Caprona, the Montanas and the Petrocchis, and they're sort of like the Capulets and the Montagues, hating each other for years over something trivial that has grown out of proportion.  The main character is Tonino, a little boy in the Montana family.  Like Christopher Chant, he's having a hard time with his magical talents.  His family is famous for creating spells, but Tonino seems hopeless.  However, his magical powers come to light when an evil enchanter is trying to steal the magic from Caprona while they're under threat of war.  The rivalry between the Montanas and Petrocchis comes to a head as the enchanter must be stopped.

I had a harder time getting into this book, but once I did I really enjoyed it.  It was interesting to see DWJ write about in a setting outside of England (or magical versions of England, I suppose).  Chrestomanci does make an appearance, tying this book in with the rest of the series.  I especially liked the way DWJ worked him into the story in a way I didn't expect.  This was the second book written for the series, but I think you could read it in any order.

While I was on vacation recently, I also read Witch Week and Mixed Magics, which is a collection of four stories with Chrestomanci and includes some of the other characters in the series.  I also have Conrad's Fate checked out from the library, and hope to start it soon.  I'm really enjoying the Chrestomanci series.  If you are a fan of DWJ you'll probably love it.  I think it's a good choice for anyone who enjoys Harry Potter or other children's fantasy as well.