The Go-Between by L. P. Hartley 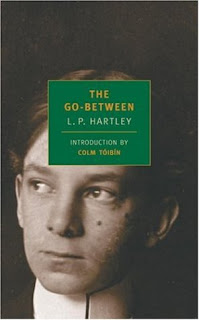 "The past is a foreign country.  They do things differently there."  Another of the best first lines ever.  [I didn't include this book in that post, as I hadn't finished it yet.]  But another great line, and a great book.  But it just broke my heart.

This is the story of young Leo Colston, a twelve year old boy spending the summer holiday with a school friend on a country estate.  It's set in 1900, at the very end of the Victorian era.  As an adult in his sixties, Leo finds the journal he kept that summer, and he's reminiscing about this summer and how it changed his life.

Leo is at Brandham Hall, a country estate, as a companion to his school friend Marcus Maudsley.  Unfortunately, a few weeks into the summer, Marcus falls ill with the measles and is quarantined, so Leo has to amuse himself for several weeks; he and Marcus were the only children and all the other guests much older .  He's befriended by Marcus' older sister, Marian, a beautiful young lady of about 18, whom Leo worships.  The family hopes that she'll soon be engaged to Viscount Trimingham, from whom they are leasing the estate -- he's titled but low on cash, and the Maudsley family are rich but untitled.  So, a match between Marian and the Viscount would solve everything beautifully.  Of course, things don't go as planned.  Leo is befriended by Ted, one of the tenant farmers, and soon Leo is passing messages between Ted and Marian -- hence, the title.

This book has a lot to say about Victorian ideas of class and station, snobbery, and loyalty.  Leo's pretty middle-class, and he's a little out of his depth with all of these wealthy people.  He's very aware of the class differences.  He's also friendly with Ted but is very aware that he's not the same class, being just a farmer.  He realizes he's caught in the middle of something and is trying desperately to get out of it without offending anyone, especially Marian, on whom he has a tremendous crush.

What I liked best about this book was Hartley's ability to write in the voice of a child.  I've read other books in which the narrator is a child, and a lot of them just didn't ring true -- they seemed so precocious, and much older than their years.  For example, I'm thinking about Scout in To Kill a Mockingbird, one of my favorite books of all time.  I love this book, but Scout doesn't sound like any child I've ever known, and I have two girls of my own.  (Other than this, I think it's perfect).  I didn't get any hint of that in Hartley's novel.

My one complaint is [contains spoiler! highlight if you want to read this section] that Leo has no clue about sex -- which I find pretty unbelievable for a 13-year-old boy, especially one who attends a boy's school.  I am sure that some other schoolmate would have known something and talked about it!  Seriously.  There would have been boys with older siblings or who had been on a farm or something.Anyway, I just found that terribly unrealistic.  But still, it's a great book, beautifully written.  Hartley is also very skilled at descriptions -- I could absolutely imagine myself right there with Leo.   There's an detailed chapter about a cricket match between the villagers and the residents and guests up at Brandham Hall -- I don't know anything about cricket (or much about any other sports, for that matter) but Hartley made it both interesting and full of tension, just like a real sporting event.  It takes a talented writer to get me interested in sports, believe me!  And the ending -- well, I couldn't possibly spoil it, but it's pretty dramatic, I couldn't stop reading.  This is one of those great classics that I think is sadly unappreciated.


This review is also posted at Our Mutual Read.
Posted by Karen K. at 5:52 PM