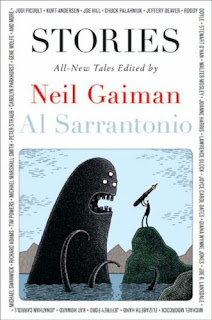 I put this book on hold from the library since included a new story by Neil Gaiman, one my favorite authors.  I was surprised and delighted to find that my favorite stories in this collection were by other authors, some of whom I'd never read before.  For example, I probably never would have read anything by horror author Joe Hill (son of Stephen King) but his story, "The Devil on the Staircase," is one that I won't forget.  After committing a crime of passion, a poor Italian laborer rushes down mysterious stone steps into what he believes is Hell, with devastating long-term results.

I expected this collection to be filled with stories of the supernatural, fantasy, and science fiction, but some of them were mystery and suspense.  I recognized quite a few of the authors, and some of them surprised me -- Jodi Picoult, who isn't really known for fantasy/supernatural; Joanne Harris, best known for Chocolat; Joyce Carol Oates; Richard Adams (of Watership Down fame).

My least favorite was probably "Catch and Release" by Lawrence Block, which gets into the mind of a serial killer.  Normally I like his stories, but this one was just a little too realistic, so much so that I can't forget it and wish I hadn't read it.  Block has a similar story in an older collection called Some Days You Get the Bear -- I read it more than ten years ago and I still can't forget it, and not in a good way.  Still makes me shudder to think about it.

But anyhow, I should focus on the best stories.  My favorite has to be by Diana Wynne Jones (I didn't even know she was in the collection until I saw it in the book, so that was a lovely surprise!); it's called "Samantha's Diary," about a woman who starts receiving gifts from a stranger -- all the gifts from The Twelve Days of Christmas.  Every day -- it begins with the partridge in the tree, then the doves, the hens, and all the rest.  It's driving her crazy and all the birds are making a horrible mess.  I thought it was hilarious.  Even if I wasn't an enormous fan of her work, I think I still would have liked this one best.

Of course the collection includes a vampire story.  After Twilight and Sookie Stackhouse, I'm a little tired of vampires, but "Juvenal Nyx" by Walter Mosely was really good, one of the best vampire stories I've ever read.  I'd never read Mosely though I've seen the movie version of Devil in a Blue Dress.  Next time I'm in the mood for a mystery I will definitely look for one of his books.

Overall, this was a really interesting mix of stories, authors, and styles.  They seem really disparate, but the collection really works because of the quality of the writing.  It really sucked me in and I was compelled to finish all of them, so that's saying something.
Posted by Karen K. at 9:35 AM