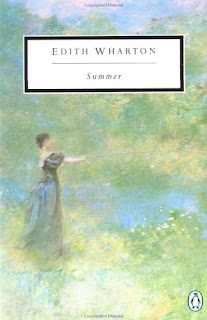 This book was a bit of a bummer.  Summer has been on my to-read shelf for several years (I bought this edition specially because I loved the cover; the original painting is at the Smithsonian), but other books kept shoving out of its place in line.  But lately I've been sneaky and now I only nominate books for my face to face discussion groups if they are sitting on my to-read shelf.  Basically, I want to force other people to read what I want. Anyhow, Wendy, the librarian who coordinates the group, appropriately chose this for our August read, and we had a great discussion this week.

Summer is the tenth novel I've read by Edith Wharton, and I must say I was a little disappointed. I've been a huge Wharton fan since I read House of Mirth several years ago, but somehow this book just didn't do it for me.  I was so hoping I'd love it as much as Ethan Frome, but it was not to be.

I should back up and include a quick synopsis here:  Published in 1917, this is the story of Charity Royall, a 17 year old girl living in a small town in western Massachusetts, probably near the Berkshires.  Charity is the foster child of Mr. Royall, a respected lawyer in the town.  He's now a widower and he and Charity have something of an awkward relationship.  Meanwhile, a young architect from Boston, Lucius (note the similarity to the name Lucifer!) has come to town to study some of the old houses, and Charity falls in love with him.  This being an Edith Wharton novel, things do not bode well for Charity's romance.

Years ago, Mr. Royall brought Charity down from "the Mountain," a nearby community full of rogues and lawless folks, to be brought up in a better place.  However, Charity isn't particularly grateful.  She's been brought up her entire life knowing she somehow isn't as good as everyone else because of her parents and where she came from, and she's pretty resentful.  She doesn't have much education or interest in intellectual pursuits.  I should have known Charity was going to annoy me from the very beginning -- when the story begin she's been skiving off her job at the library, and she has absolutely no interest in reading what's in "those dusty old books." !!!  I should have just shut the book aside right then and there, and just admired the pretty picture on the cover.  But I persevered.

Sadly, I didn't like Charity much more by the end of the book, but I did feel sorry for her situation.  Once again, Wharton focused on how few choices women had in the early 20th century, and the double standards women to which women are held.  I think I would have liked this book a lot more if Charity had been a more sympathetic character.  In a way I pitied her because she's really just a teenager and made a lot of bad choices, plus teenagers tend to be pretty self-centered.  However, she doesn't really show any kindness or sensitivity to anyone other than Lucius, and she's very attracted to him, so she has ulterior motives.

Wharton described this book as her "hot Ethan," comparing it to Ethan Frome, one of her most famous works, and one of my favorites.  However, I was so much more sympathetic to Ethan -- he had far more redeeming qualities than Charity.  He didn't want to hurt anybody, but he was trapped in an unhappy life and a miserable marriage.  He'd always wanted an education and couldn't get it because of his obligations.  Charity, on the other hand, has no interest in improving herself, even though she seems fairly bright.  We did have an interesting discussion about whether she has unselfish or selfish motives at the end.  It is possible Charity made a good decision at the end, the best possible decision given her situation, but I just thought it was sad.  Some of Wharton's books are beautiful and tragic, but this one just made me depressed.  Still, I'm glad I read it.

Other reviews of Summer by Edith Wharton:

If you've reviewed this book and would like me to link to your blog, please leave a comment and I'll add a link.
Posted by Karen K. at 9:10 AM