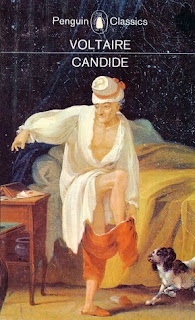 I'm lucky enough to be in a face-to-face, in-real-life book group that only discusses classics.  Every year, the group leader, Amanda, does a great job of balancing all the books we read -- male/female authors, books in English vs. books in translation, and also different time periods and style.  Not only that, we're limited to titles that have enough copies in our public library, so no one has to purchase books.

Our August read was Candide, which covers several categories -- first of all, it was written in 1759; it's translated from French; and finally, it's a satire.  Great pick, Amanda!  If you're like me, and normally run in fear from an 18th century novel, you should consider it.

This was my third reading of Candide.  The first time was in my junior year of high school, for World Lit.  (Slightly surprising, seeing as how it's a little racy -- it's an 18th century book but there's quite a lot of sexual innuendo.  Maybe none of the parents had read the book and had no idea.)  I read it again a few years ago for another book group and remember enjoying it.

Basically, this is a satire about a young man, Candide, who grows up as an illegitimate child on a Baron's estate.  He's in love with the Baron's beautiful daughter, Cunegonde, and their tutor, Pangloss, has convinced them that they live in the "best of all possible worlds." (Pangloss is a satirical representation of the philosopher Leibnitz).  Candide is thrown out in disgrace after kissing Cunegonde, and must make his way in the world.  It's a picaresque novel, in which our naive hero encounters disaster after disaster -- earthquakes, wars, shipwrecks, and more -- but he manages to survive and is determined to reunite with Cunegonde.  No matter how terrible his life is, he is eternally optimistic and hoping to find his lost love.  He meets all sorts of people, many of whom are based on historical characters and philosphers, all skewed by Voltaire.

Apparently, Voltaire was both celebrated and reviled for his satire, and was exiled more than once.   This book satirizes philosophy, various governments, religion -- no wonder he was drummed out of France.  I'm sure the Catholic Church hated him, he takes some real shots at the Jesuits and at the Inquisition.  I wish I knew more about philosophy and the Enlightenment, so I'd know more about what he was satirizing.  It's a fast, easy read, and parts of it are really funny.  If you'd like some more background, click here.

Somehow I just didn't enjoy Candide as much this time around.  I know it's a satire, but I got a little tired of being reminded of all the terrible things that have happened, tsunami and earthquakes and rapes and murders and theft and torture.  Maybe I'm just taking this book too seriously.  The terrible things seem to be outweighing the funny bits this time.   I suppose I've been reading too much world news lately, all the terrible war crimes and disasters.  But for an book that's 250 years old, it's surprisingly enjoyable.

Amanda at the Zen Leaf also reviewed Candide (yes, the same Amanda who leads my book group, and who inspired me to start blogging.)  You can read her review here.
Posted by Karen K. at 9:39 PM