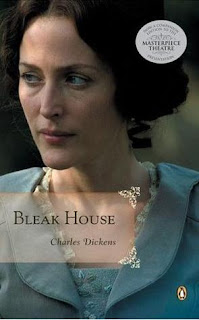 Bleak House continues!  I shall try not to gush, but I do love this book so.  Since our last update, there have been some interesting developments.

So far, Esther Summerson and her two companions, Ada and Richard, are settling in quite nicely with their guardian John Jarndyce, at Bleak House.  They've had some visitors, like Jarndyce's school chum Mr. Boythorn (who also has a connection with the Dedlocks; they are in a dispute over property boundaries and a right-of-way). Richard is trying to decide on a Profession.  Although he's hoping to make his fortune from the Jarndyce court case, his guardian keeps telling him not to get his hopes up.  There's also a visit from one of the London law clerks, Mr. Guppy, who has the hots for Esther, much to her chagrin.

Meanwhile, the Dedlocks have returned from Paris.  Tulkinghorn, the lawyer, has made inquiries about the law writer whose handwriting so interested Lady Dedlock.  He tracked him down to a squalid room (coincidentally, the very building housing another person with an interest in Jarndyce, the daffy Miss Flite).  Unfortunately, Tulkinghorn finds him dead from a drug overdose, so his connection to the story remains a mystery.  Tulkinghorn is suspicious.

This seems like a lot of unrelated material, but it all ends up like pieces of a puzzle.  I admit that if I hadn't watched the miniseries before I'd read the book, I probably would have been totally confused.  You need patience with Dickens.  I'm just over 200 pages into the book (close to 1000 pages!), and there are several storylines that sometimes seem unrelated.  However, it all starts to come together soon.  Because this story was originally stretched out over 18 months, Dickens took a lot of time setting up all the different elements.

I admit that sometimes Dickens does tend to blather on a bit (there are a few sections that I have been known to skim, especially when he's trying to make a point about the terrible Byzantine judicial system). I still firmly believe it's worth getting through the boring bits in order to get to the good stuff.

One of the things I love most about Dickens is his delightful use of names.  Frequently, they give us a subtle (or not-so-subtle) hint about the characters.  For example, a law clerk, Mr. Guppy, is kind of annoying fishy sort of person; Tulkinghorn, the lawyer, is kind of a looming, scary presence; Miss Flite is a flaky, crazy bird lady (the Victorian version of a crazy cat lady); Esther Summerson, our heroine, is supposed to be as bright and cheerful as the summer sun.  There are lots more characters with fun names; in fact, there's probably forty or more principal characters!  At one point I actually started making a list, just for fun.  I don't have any problem keeping them all straight because they're very memorable.  Dickens' great characters are just as good as his intricate cliffhanger plots -- I'm so glad I didn't have to read this as a serial, because the waiting would have made me crazy.   I hope everyone else is enjoying the Bleak House readalong!

Click here for more posts on the Bleak House readalong.
Posted by Karen K. at 11:23 PM