The Story of Edgar Sawtelle by David Wroblewski 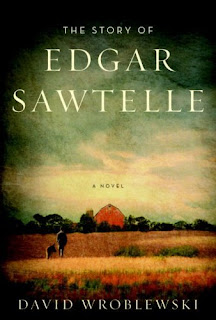 I have very mixed feelings about this book.  Lately, I've been avoiding a lot of "literary fiction," e.g., book club books (except for my own book group's selections).  Somehow, if a book gets really hyped, I'm kinda turned off by it -- I have been so disappointed the past couple of years by books that Everyone Just Loved!

I hope this doesn't mean I'm turning into some kind of literary snob. There have been some pleasant surprises -- for example, The Help, which I really liked.  On the other hand, there are quite a few that everyone else loved that I just hated, like Wicked, and The Memory Keeper's Daughter.  There's a long list, but I'll save it for another posting.

So, Edgar Sawtelle is the story of a youth, Edgar (obviously), growing up circa late 1960s - early 1970s, in rural Northern Wisconsin.  Edgar was born without the ability to speak, though he can hear perfectly well. He's very smart and learned sign language at a very early age.  He and his parents live on a farm where they raise very special dogs, which appear to be some sort of German Shepherd hybrid.  Most of the action in this book takes place when he's about 13, after his uncle Claude has reappeared and moved back to town and things get stirred up.

I hope it's not a major spoiler to mention that this book is a reworking of the Shakespeare play Hamlet. (highlight if you don't want to be surprised).  Someone at the book group last month mentioned this, but it's also all over the reviews and book jacket, so basically, the plot was pretty much spoiled for me -- I knew many of the major plot twists and how it was going to end.   Obviously, writers have been reusing plots over and over again.  And I don't know that I'm in a position to criticize, given that I've never even published a short story, much less a 576 page book like this one.  I just thought that this book would have been so much better if Wroblewski had come up with his own plot, which is the part I liked least.   I really liked most of the characters, the setting, and, as I am a dog lover, all the details about the dogs and their training.  I just hated the plot twists, and particularly, the ending, which seemed really rushed and action-packed compared to first several hundred pages, which moved much more leisurely.  I really wish I'd stopped reading at about page 500, since I basically knew Edgar's fate.


Also, there were a lot of unanswered questions in this book -- a lot of the middle deals with letters written back and forth between Edgar's father and grandfather and various dog-raising experts, which never seemed to mesh with the rest of the book.   Sometimes I need to be hit over the head with metaphor and symbolism, but I never figured out what the author was doing with all of this, which was annoying.
In general, I'm not overly impressed by authors who rework someone else's plot or characters.  Somehow it feels like cheating to me.  (Could be one reason I was not a fan of Wicked). I'm not saying I've never liked any book like this, it's just that they always seem to be few and far between.  Ahab's Wife by Sandra Jeter Naslund was excellent, and I've loved The Wide Sargasso Sea by Jean Rhys, which is a 20th century prequel to Jane Eyre.  And the new horror mash-ups like Pride and Prejudice and Zombies just crack me up -- but I consider those more as a joke than anything else.  I just get tired of seeing yet another continuing story about one of Jane Austen's characters.

So -- I was mildly disappointed, but not so much that I wanted those hours of my life back, like when I read The Memory Keeper's Daughter or The Corrections.
Posted by Karen K. at 9:05 AM