I apologize for the combined posts, but life gets in the way of blogging and reading sometimes.  Not that my life has any Dickensian plot twists, but there it is.   Therefore, I have combined my Bleak House comments for the past three weeks.   We've moved along several hundred pages, and a summary could go on and on.  The plot is really moving along now, and several of the plot threads are starting to intertwine.  Or this could just be considered unbelievable coincidences, but that's Dickens for you.  Somehow, all the characters that have been set up have to have a purpose.

Anyway, the plot with Lady Dedlock has begun to thicken -- Mr. Tulkinghorn is suspicious.  He's conspiring with a nasty character, Mr. Smallweed, to do some dastardly deed.  Mr. Guppy is also involved -- he's convinced he can find evidence that his beloved Esther is somehow connected to Jarndyce, and believes if he can find proof she may become more favorable toward him.

Richard Carston has attempted and abandoned both medical and legal studies.  He thought by studying the law he'd get a jump on the Jarndyce case, but it just wasn't his thing.  After a stern talking-to by his cousin John, he's bought a commission and has joined an Irish regiment.  John Jarndyce tried to persuade he and Ada to break off their engagment, since Richard will be far, far, away, and because he's not convinced Richard will make a go of this career either.  This has caused an estrangement between them.  My immediate reaction to this  is that Richard Carson needs a smack in the head.  Or at least a Sassy Gay Friend.  Or, maybe his cousin/fiance Ada Clare needs a Sassy Gay Friend, because she is putting up with his waffling and still loves him.  Seriously, if Richard was a real person here and now in the 21st century, he'd be a perpetual student like that guy in Wisconsin who was in his sixteenth year at college without graduating, or living in his parents' basement or garage at age 24, playing video games all night and not getting a job.  Grow up, Richard!! 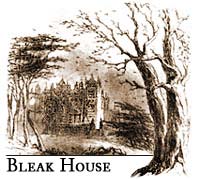 We've also met some more key characters, particularly Mr. George, a former soldier who's running a shooting and training gallery.  Richard is training as a soldier at his place, but George is having financial troubles, and this brings in nasty Mr. Smallweed, a moneylender that makes me want to boo and hiss every time he appears.  Smallweed is also involved with Tulkinghorn, the evil lawyer, so we know he's bad news.

I also wanted to mention another of Dickens' devices, the catchphrase.  A lot of his characters have their own little catchphrases.  Bleak House is particularly riddled with them.  Apparently, it's because there are so many characters, and the story was stretched out for so long, it helped the readers to remember who was who in each installment.  Mr. Jarndyce says, "The wind is in the east!" whenever something's bothering him; Mr. Skimpole is "a child, a mere child"; Mr. Smallweed keeps demanding that people shake him up; Mr. Snagsby, the hapless law stationer, always says, "not to put to fine a point upon it," and so on and so forth.  Even Esther has a bit of a catchphrase, since Richard and Mr. Jarndyce have nicknamed her Dame Durden.  I couldn't figure out the reference so I finally had to Google it -- Dame Durden is from a traditional English song about a housewife, sort of like Old Mother Hubbard.

Nevertheless, I really enjoy the catchphrases (well, except for Smallweed, but he's so obnoxious and nasty I wish I could jump into the book and throttle him), though I know some readers might find them irritating.   It does help to keep everyone straight.  There are more than 40 principal characters in Bleak House -- I'm halfway through the book now and I know there are a couple of characters that still haven't been introduced!  I'm really enjoying it and will try to post more faithfully.
Posted by Karen K. at 3:56 PM