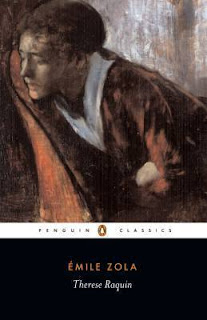 This is the second half of a joint review with Amanda at The Zen Leaf.  For the first half of the review, click here.

Quick synopsis:  Thérèse Raquin has lived with her aunt and sickly cousin Camille since she was a small child and her father basically abandoned her.  Now a young woman, she and her cousin Camille have married and still live with his mother, Madame Raquin, in a dreary little alley in Paris where they have a small haberdashery.  Her life is dull but things suddenly get exciting when she falls for her husband's co-worker, Laurent.  They begin a torrid affair but things take a turn for the worse after Thérèse and Laurent decide they want to be together.

[In the first half of the review, Amanda and I had been discussing some of the themes in Thérèse Raquin.]

Amanda: Oh wow! I was going to point out that same theme - Be careful what you wish for. It was like their wish was their punishment. Fantastic! I’m glad you saw that too. For such a little book, this really had a lot in it, didn’t it? And on top of that, the book could be read strictly for plot. There’s so much ghost story creepy vibe to this book that it’s really just on the edge of pot-boiler. In fact, if it weren’t for all the literary themes, I’d say it was pot-boiler! I loved it, though. It was so fascinating to read. I read somewhere that Zola was doing a character study with it...but that seems to be typical of Zola. He loves character studies! Or just studies in general. I think that’s why I love him so much.
Karen: So, do you think it was a character study of Thérèse or Laurent, or both?  And I’m curious about the other Zola works that you read.  Would you classify those as character studies as well, and , if so, of just single characters or multiple characters?
I also think that Paris is a character in the book.  Zola does such an amazing job of describing the the bleak little alley in Paris where the Raquins lived and worked.  I know descriptions are you not your favorite thing, but Zola made the whole scene so vivid.  The Belly of Paris was set primarily in Les Halles, the famous food market, and he described it so well.  And by the way -- there are a couple of scenes in Thérèse Raquin which are also extremely vivid, but they are not delicious, to put it mildly.  You might not want to eat lunch while reading this book.  That’s all.
Amanda: Supposedly it was a character study of all three major characters. They were both supposed to represent different types of personalities, from what I read. Very interesting stuff.
I’m not sure the other books I read would be classified as character studies, but I do think the work he put into studying people paid off when it came to both books. He certainly went out of his way to make sure he know all his subject matter very well, from the descriptions of Paris to the life of a hired woman to the work of coal-miners. He was very thorough. And despite my normal dislike of description, I actually don’t mind it when it comes to Zola, because he weaves it in so artfully (rather than dumping it in page-long paragraphs that go on forever!). I never feel overburdened by description with him. Of course, much credit has to be given to the translators, which have done an excellent job on the books I’ve read. I love Leonard Tancock’s work, so I’ve grabbed up as many of his translations as possible. I wish he’d translated more! How have your translations been?
Karen:  They’ve been good -- I was surprised at how easy to read Zola is.  I guess I was expecting more long, flowery sentences like Dickens -- probably because it’s 19th century.  But Zola was a journalist first and his prose is really straightforward.  I read the Penguin Classics edition of Thérèse Raquin, which is translated by Robin Buss.  I thought it was excellent.  My edition of The Belly of Paris was translated by Mark Kurlansky, who also wrote some great non-fiction food.  I found it very easy to read, almost contemporary, but not in an intrusive manner -- I recently read a translation of Chekhov that was so contemporary, it was rather jarring.

Anyway, I’m really happy to have discovered Zola, who has become one of my favorite classic authors.  I went out at bought another of his novels, The Drinking Den, and I’m planning on reading it soon.  I will definitely post my impressions as soon as I get to it!  Any more Zola on your to-read list?

Amanda: Yep, a whole bunch. Next up will be La Bête Humaine, recommended by my friend Veronica, who says Zola is her fav author and that’s her fav Zola. I’d also love to get my hands on and read The Dream this year. It sounds so fantastic!

Thank you so much for doing this joint-review with me Karen! Any last words on Thérèse Raquin? My only thoughts are that if I’ve loved three different Zola novels like this, I’m hopeful that I’ll just keep loving them!
Karen:  You’re so welcome, I loved it!  We’ll have to do this again soon.  I’m definitely reading more Zola.  Besides The Drinking Den, I’m hoping to read The Kill and The Ladies’ Paradise, plus of course Germinal -- it would be great if we could discuss it in our book group.   And I’d love some suggestions as well -- readers, have you read Zola?  Which were your favorites?
To read Amanda's review of Germinal, click here.
Posted by Karen K. at 9:12 AM