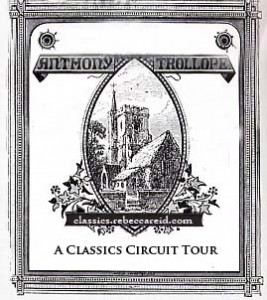 Two whole weeks of Anthony Trollope!  It's my turn for a review of Barchester Towers, the second book in his Barsetshire Chronicles and one of his more popular books.

Anyway, I've been wanting to revisit Trollope for awhile.  Last year I read The Warden, the first of the series set in fictional Barsetshire.  It's one of Trollope's shortest novels at only about 250 pages, but I didn't like it nearly as much as The Way We Live Now -- it seemed to take forever to get going.


Barchester Towers gets interesting much more quickly.  It picks up not long after the end of The Warden.  If you haven't read The Warden, you may want to skip to the end as there are mild spoilers (it is a series after all). Anyway, the Bishop of Barchester is on his deathbed.  Dr. Grantly, his son, who is also his archdeacon, is widely expected to pick up the reins and be appointed to his father's position, but that would be too convenient.  A Dr. Proudie from London has been appointed instead.  However, Dr. Proudie has no intention of actually spending that much time in the country -- he'd rather stay in London and make appearances in the House of Lords, so most of the responsibility will be shouldered by Mr. Obadiah Slope, his chaplain. This appointment throws the whole social and religious society in Barchester into a bit of an uproar because Dr. Proudie and Mr. Slope are more evangelical, also known as Low Church -- Trollope was making a statement about the schism in church politics.

It also becomes complicated by the fact that Dr. Grantly's father-in-law is Mr. Harding, the eponymous warden of Hiram's Hospital from the first novel.  Actually, he's now the former warden, as he resigned his positions due to a kerfuffle.  (See The Warden for more background.)  The slippery Mr. Slope decides to exercise his influence with Dr. Proudie to get his choice selected as a new warden.  Mr. Slope and Mrs. Proudie's opinionated, overbearing wife get into a power struggle over this, leading to one of the funniest bits in the book.  It's a bit long but I think it's worth sharing: There was a dead pause in the room.  Mr. Slope had risen from his chair, and was standing with his hand on the back of it, looking at first very solemn and now very black. Mrs. Proudie was standing as she had first placed herself, at the end of the table, and as she interrogated her foe she struck her hand upon it with almost more than feminine vigour.  The bishop was sitting in his easy chair twiddling his thumbs, turning his eyes now to his wife, and now to his chaplain, as each took up the cudgels.  How comfortable it would be if they could fight it out between them without the necessity of any interference on his part; fight it out so that one should kill the other utterly, as far as diocesan life was concerned, so that he, the bishop might know clearly by whom it behoved him to be led.  There would be the comfort of quiet in either case; but if the bishop had a wish as to which might prove the victor, that wish was certainly not antagonistic to Mr. Slope.

There are lots of misunderstandings, power struggles, and people falling in and out of love.  Much of the action comes to a head at a hilarious garden fete hosted by the local gentry.  Parts of this book really reminded me of Elizabeth Gaskell (I could absolutely envision the garden party after my repeated viewings of Cranford and Wives and Daughters) and the domestic scenes reminded me quite a lot of Jane Austen, particularly her sly wit. I've heard that Trollope was a huge Austen fan, which doesn't surprise me after reading this book.

The book does start out a bit slow, though it picked up and became a faster read by far than The Warden -- I think I read about 150 pages this past Monday, which for me is amazing for a Victorian.  I know Carolyn at A Few of My Favourite Books read 300 pages of Trollope a day for this circuit -- wow!

The only other comment I'd like to make is that I really wish I had researched the Church of England before I'd started this book -- I wasn't raised Episcopal so I didn't really understand the difference between High Church and Low Church and all the different titles with the hierarchy of the various characters' positions.  I wish I'd found some kind of chart to make it less confusing, like a family tree.  I still enjoyed the heck out of this book but I think I might have gotten more out of it if I'd known more about the history.  Of course I didn't read the introduction to this book first because I was afraid of spoilers.  The endnotes were good but I think they assumed the reader knew more background.

This was one of my favorite books of the year and I'm eager to read more Trollope.  One of my goals for 2011 is to finish the Barsetshire series -- I've heard great things about both of the next two books, Dr. Thorne and Framley Parsonage.  And today I was at Half Price Books with Amanda from The Zen Leaf, where I was delighted to find another volume of Trollope that includes Barchester Towers, Miss MacKenzie, and Cousin Henry -- for $3.22 which included tax!  Sweet!

If you'd like to read more reviews of Trollope's novels and stories, please visit The Classics Circuit for links and more information.
Posted by Karen K. at 6:00 AM