Someone at a Distance by Dorothy Whipple 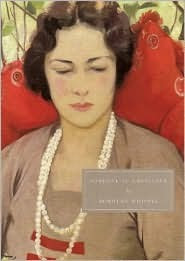 At last, Persephone Reading Weekend!  I knew I had to read at least one book this weekend by Dorothy Whipple.  After I read The Priory last December, I knew I wanted to read more of her books, and I got three for Christmas! When it came time to choose the next one I just decided to go with the one I'd bought first.  I know this isn't everyone's favorite Whipple, but I just loved it. I loved everything about it -- except the characters I hated, but I was supposed to hate them.

Essentially, this is a story about a marriage in 1950s Britain, and how it suddenly dissolves.  Avery and Ellen North are an upper-class couple living in the country outside London.  He's in publishing but has inherited wealth; she's a busy housewife who loves to garden, and they have two lovely children.  The oldest, Hugh, is doing compulsory military service before he goes off to university, and the younger, Anne is a horse-crazy teenager at boarding school.  On the surface, they seem like the ideal family.

However, Mr. North's widowed mother, who is wealthy and lives in a large estate, is dissatisfied.  No one's giving her enough attention, so she answers an advertisement from a young Frenchwoman, Louise, and hires her to come and stay as a sort of live-in companion and French tutor.  Louise is bored to death living in a provincial town, and angry at having been thrown over by her secret lover for a more socially advanced fiancee.  Staying with the Dowager North is her ticket out.  She is an interloper, and one thing leads to another, but in a really interesting way.

If you read Dorothy Whipple expecting a lot of plot or action, you will be disappointed, as they're extremely character-driven.  But somehow I never notice this.  Her characters are so beautifully realized that I get sucked in to their world and I want to know more about them.  Even though not much happens on the surface, this book raises a lot of questions about marriages and family dynamics, and what motivates people to do the things they do.  Whipple is really good at getting into characters and letting the reader in on what makes them tick.  They're really dimensional -- when she's writing about the characters you're meant to dislike, she is somehow still able to make them somewhat sympathetic.

My one complaint about this book was that so much time was spent setting up the story and developing the characters, the ending seemed a little rushed in comparison.  After two Whipples, I'm beginning to suspect endings might not be her strong point; in retrospect, I realized The Priory had the same problem.  I did like that it was somewhat ambivalent, and not a completely Hollywood happy ending.  It left open the possibility that the characters might be happy, someday.

I really wish my library had this book and that there were enough copies that I could recommend it for a book group, because I think it would be great for a discussion.  This is a book that I will probably buy and give as gifts to other people, simply so I can discuss it with someone else.  My mother is coming to visit in a couple of weeks and I'm quite sure I will be forcing this on her so we can discuss it -- hopefully before she leaves!  If we do, I'll post her thoughts as well. Mom, if you're reading this, prepare for a guest posting.
This is one of the ten Persephone Classics that are available in here in the U.S.  You might not be able to walk into Barnes & Noble and find it on the shelf, but you can order it online without too much trouble.

P.S. I'll be writing about Persephones all weekend, and don't forget about my dove-grey giveaway in the previous post!  I'm planning another giveaway this weekend as well, so please check back.
Posted by Karen K. at 8:18 AM