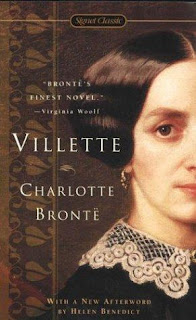 Week Three of the Villette Readalong is upon us!  I apologize for posting this early, but I'm getting ready for Persephone Reading Weekend and I have a lot of posting to do.   It's actually been about a week since I finished this section, so if I mix up any of my facts, please forgive me.

So, this week, we're discussing Chapters 12 through 17.  At first was going to start out by writing that not much happens, but now that I look back, I suppose it does.  I'll explain.

Lucy has settled into her role as English teacher in the school and spends a lot of time observing everyone else around her.  She spends a lot of evenings sitting outside in one of the school's walled gardens, and one evening she finds a mysterious little package that someone has thrown over the wall.  Dr. John is spending a lot more time at the school -- ostensibly to take care of Madame Beck's children, but does he have ulterior motives?  Madame certainly seems to have a crush on him.


Ginevera Fanshaw is still playing games with all her suitors, which makes me want to smack her even more.  She's starting to annoy me as much as Cathy from Wuthering Heights (and I do realize they're different Bronte sisters, but I always lump them in together.  I can't help it).  Anyhow, Ginevera is playing two suitors off one another -- one is a French officer and another is a mysterious man she only refers to as "Isidore."  That is a truly unfortunate name for an alias.
There's also a somewhat interesting section in which Lucy is pressed into acting a part in a play for the annual school fete -- actually, in man's part, which makes her sort of uncomfortable.  Monsieur Paul, a very overbearing sort of teacher, basically strong-arms her into taking the part at the last minute, going so far as to lock her in an attic without food and water so she can learn her lines.  I can't imagine anyone putting up with that kind of treatment -- I would have been so angry I would have refused to be in his silly play at all.  (But I am not a 20-year-old English teacher in a 19th century novel, so of course this helps to advance the plot.)  Naturally, she's playing opposite Ginevera.  To her surprise, Lucy really enjoys the play:

What I felt that night, and what I did, I no more expected to feel and do, than to be lifted in a trance to the seventh heaven.  Cold reluctant, apprehensive, I had accepted a part to please another: ere long, warming, becoming interested, taking courage, I acted to please myself.

However, the next day she has regrets and resolves never to do it again:

A keen relish for dramatic expression had reveal itself as part of my nature; to cherish and delight, but it would not do for a mere looker-on at life: the strength and longing must be put by; and I put them by, and fastened them in with the lock of a resolution which neither Time nor Temptation has since picked.

I'm not really into literary analysis, since I'm writing this for fun and not a class assignment, but I definitely get the idea this is an important section and one that would be discussed and analyzed if this was a literature class.   In general, Lucy seems to spend a lot more time watching than doing. Maybe this is because it's a later, more mature novel than Jane Eyre, but it seems to me this book is much more character-driven than plot driven, much more internal and philosophical.  I wonder if this passage signals that Lucy was tempted stop being so passive, but realizes it's not in her nature (which would surprise me because she took charge and moved to France and got a job); or, if it signals that she's ready to change and take charge of her life.  We shall see.

Before the close of this section, Lucy has a crisis of nerves and falls into a fever -- what is it with the mysterious fevers people fell into in those days?  Is it just a literary device?  Obviously they didn't have the medical knowledge of today but it seems like literary characters seem to mysteriously fall into a fever at convenient plot points, after a tragedy or broken heart or what have you.  Anyway, Lucy is naturally saved and when she comes to, the reader is presented with another of those fabulous and unbelievable coincidences of Victorian literature.  I'll say no more.
Posted by Karen K. at 4:56 PM