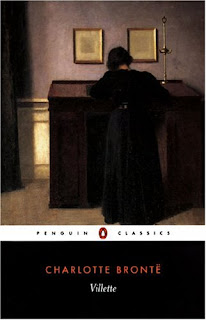 Finally, I have finished Villette.  I know, it's a readalong, but I had some real momentum while reading it last week, and bloggers, I just couldn't help myself -- I finished the rest of the book.  The story really picked up for me and I had to keep going.  However, when it came time to actually put some thoughts down, I am kind of at a loss.

Without giving too much away, finally, the entire Lucy/Graham/Polly love triangle was resolved, pretty calmly.  Polly turned out to be a pretty good egg after all; Ginevra was as obnoxious as ever -- one of my commenters last week wrote that she wanted to push her off a cliff, which is about right.  Originally I just wanted to smack her, but then she got worse.

And some other characters who seemed pretty interesting and fairly benign earlier in the book got more complicated, and in some cases, more treacherous.  I won't say which ones in case anyone is still reading it, but some of them really infuriated me.  I know this sounds really vague but a lot happens in the last quarter or so of the book, and I got hooked on it and finished it all up in a couple of days.  I don't know if it's because the story got much better or if I was just unable to drag it out any longer.

After spending so much time on this book I'm at a loss, and I just can't come up with clever and insightful comments about this book.  After some slow spots, I did end up liking it (though I wasn't thrilled with the ending).  While it's not nearly as exciting as Jane Eyre, it has some great character development.  I'm not sure why some people consider it Charlotte Bronte's finest book. I suppose as her final work, it's her most mature.  My copy (Modern Library) has an introduction by A.S. Byatt and some Frenchwoman that probably has all kinds of insights and background which I was saving for the end, but it's 50 pages long, and I am too tired of looking at this book to open it again.  I'm glad I finally got around to reading it, but I'm in no hurry to pick up her other books Shirley (654 pages!) and The Professor (a mere 300).

Thanks again for Wallace at Unputdownables for organizing this.  I did enjoy participating in the Readathon, since it motivated me to keep going.  I apologize for cutting my participation short, but maybe two months was just too long for my short attention span.
Posted by Karen K. at 2:48 PM