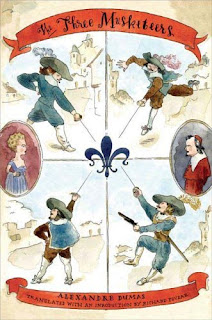 Sword fighting! Romance! Mystery! Intrigue! What is not to like about The Three Musketeers?

Well, it is long, and it's not exactly what you'd call great literature.  But it is a beloved adventure novel that has stood the test of time, so therefore it is considered a classic.

And isn't that an awesome cover?  This is so shallow of me, but it was really the cover that finally attracted me to this book.  I remember watching an old 1970s film version starring Michael York and Richard Chamberlain, years and years ago, but I'd never had much desire to read it.  However, this recent edition translated by Richard Pevear intrigued me.  I realized I'd read hardly any classic French literature, so I put it on my birthday list. And the book sat on my shelves and was moved from house to house unread, until the combination of the TBR Dare and Allie's Readalong inspired me to finally start it.

If you are not familiar with the story, basically, young D'Artaganan (I don't even know if he HAS a first name), from Gascony, travels to Paris with a letter of introduction from his late father to the head of the Musketeers, who are the king's guards.  Unfortunately, the letter is stolen, so by his wits and skills alone he must attempt to join this elite group.  Along the way, he accidentally insults three different musketeers, who each challenge him to a separate duel.  He has no idea that these are the three famous friends Athos, Porthos, and Aramis, and when they arrive for the challenge (Porthos and Aramis are the seconds so they show up for the first duel early), they are insulted by the cardinal's guardsmen, and end up combining forces against their common enemy.  D'Artagnan impresses the Musketeers with his fighting skills and bravery and becomes their protege.

D'Artagnan soon becomes caught up in political intrigue between the Queen and the evil, power-hungry Cardinal Richelieu; meets a the love of his life (who is married to his nasty landlord); and has to save the day with the help of his brave comrades.

Honestly, this is a really fun book.  Yes, there is sword-fighting and action, but what I like best about this book is the friendship between and the four friends, and the relationship between D'Artagnan and his lackey Planchet. And it's really quite funny.  For such a long classic, it's an easy read, and I had no trouble reading eighty or so pages at a single stretch.

The only problem I have with this book so far is the lack of morals some of the characters are displaying.  These guys think nothing of gambling away a friend's horse, stealing wine, and challenging someone to a fatal duel over a mere insult.  And for such amoral people, they think nothing of meting out some pretty harsh justice for others -- there's a pretty shocking scene toward the middle of the book that I won't give away.  Maybe that's the way things were in the 17th century France, or maybe it's just a fantasy that amused people at the time when it was published in 1840; maybe the musketeers are just doing what all the readers were fantasizing about.  Either way I'm not taking it seriously enough to let it detract from my enjoyment of the book.  I look forward to completing the second half soon.
Posted by Karen K. at 10:13 AM